Whiling away the hours

Recently I travelled from Sydney to Paris, via Amsterdam. While it is always a thrill to be in Paris, it is not always a thrill to spend 21+ hours sitting bolt upright in an economy class seat. Thankfully Singapore Airlines have a vast array of movies in their entertainment options. So as part of my trip I watched two French films to get myself into a French headspace. 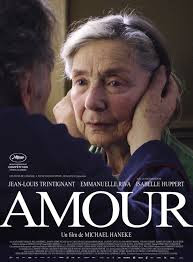 I hadn't managed to see Amour at the movies, but had managed to hear about it, and was very keen to see it.

Amour is a story of ageing that just happens to be set in a Parisian apartment. It is very much a domestic  story and film, there are very few scenes outside the apartment, and these only in the hallways of the building from memory, somewhat disappointingly there are no gratuitous shots of Paris at all.

Georges and Anne have lead intellectual lives filled with music and reading. Anne becomes quite debilitated after a stroke, and Amour is the story of illness, decline and the amour of the title.


Amour is a gentle movie after a quite noisy and distressing start. In the first scene we see the fire brigade/pompiers breaking into the apartment, clearly needing to break in because there have been complaints of a smell.

I started watching Amour on the Sydney-Singapore leg of my flight, but rather annoyingly left it too late, and didn't see the very end until after we'd begun the Singapore-Amsterdam journey at some distressingly late hour.

It is rather distressing to wake up after the only sleep you'll get on your Singapore-Amsterdam flight and realise that you're still flying over India and have many, many hours before your arrival in Europe. The second movie I chose to fill the time was one I hadn't heard of at all- In the House/Dans la Maison. 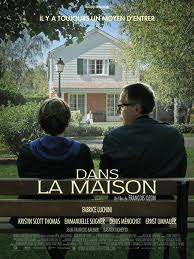 I can't particularly remember what drew me to pick this one. It was rather odd. Germain is the French teacher at a high school, Lycee Gustauve Flaubert. He despairs that his new class of 16 year olds is the worst class ever. Things change when one student, Claude Garcia hands in his first writing assignment. Claude has spent much of the summer watching the house and family of another classmate Rapha who he suspects to have a perfect family.

Germain is married to Esther (Kristin Scott Thomas, the only actor I recognised in this film, but then I'm rather hopeless at that), who is the director of a modern art gallery. Esther and Germain live in a book lined apartment as people always do in French films and discuss art and literature at considerable length. Both Germain and Esther are on benzodiazepines.

It all gets very odd. Claude is a strange boy who wants to enter houses and learn the stories of the occupants. I found the ending bizarre and unsatisfying in many ways, which I suspect were not just because of the poor sleep and disturbed time zone functioning on my overnight and seemingly endless flight.

Overall I did enjoy both movies. I don't get to see all that many foreign language films in small town Australia, and I was rather excited whenever I understood a whole sentence in French. I enjoy French language movies too as a glimpse into a world that is not mine. 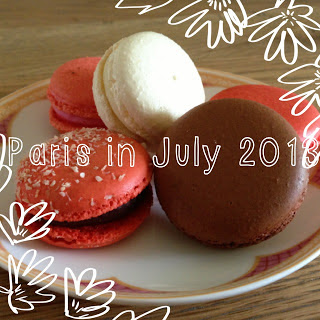 Paris in July 2013 cohosted by Thyme for Tea and Bookbath

Labels: Whiling away the hours

I've seen Amour twice now; the first go round I felt numb. I needed the second viewing to fully appreciate the gentle love story you managed to discover even on your long, long journey. I can't wait to hear all about your trip! Enjoy:)

Thanks for this review of both movies. I think I'd like to see both of them. I hope the second movie at least had some gratuitous outdoor shots of Paris. Here’s my Dreaming of France meme

I missed Armour too, and am hoping it's available when we fly OS in August. A friend saw it on the Sydney-Perth trip recently and that gave me hope. Now you have too.

We've been watching a lot of French movies, but I haven't seen these. I get a kick out of recognizing a word now and then. Sentences are still well beyond my capability.

Amour was on my list too this past summer, but even though we live in the city, we still managed to not find the time to go!
Thank goodness for dvd and long o/s flights :-)

You definitely need some movies for that long trip across to Europe! I have been wanting to see Amour but I think it is one I will need to be in the right mood for as I'm sure it will be quite intense...

I meant to see both and missed them especially now that I'm not taking trans-Atlantic flights anymore.
Dans le Maison won acclaim in France but I didn't have my movie card back then..