Whiling Away the Hours #2- Paris- Singapore

Australia really is at the end of the world. You come to realise that as a particular truth when you settle your bottom into an economy class seat on a plane coming or going. And then you realise how long it is before you can get out of that seat.


It's a long time even if you're only doing one leg of it- Paris to Singapore alone is about 13 hours. There are many, many hours to fill. Thankfully every seat comes with its own entertainment package so that we can all watch something different.

On the way to Europe I watched Amour and Dans La Maison. I decided to continue this French theme on the way home, just to keep the French holiday feeling just that bit longer, even as it was slipping through my fingers.

First up I watched A Monster in Paris. I'd noticed it in the movie guide on the way over, and seen others watching it and liked the look of the movie. Sadly that was all I liked really. 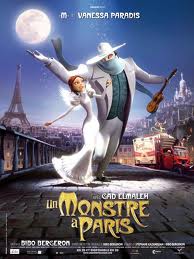 This one didn't work for me. Even the cartoon images of iconic Paris- Sacre Coeur, the Eiffel Tower, places I had been and seen just a few days before weren't really enough to hold my attention and if I hadn't been on a plane I might even have turned it off. It was like a bizarre insect Phantom of the Opera.

Thankfully my second choice turned out much, much better. Indeed I LOVED IT. I want to watch it again and again, and buy the soundtrack I am so smitten with this heretofore unknown French Gem. 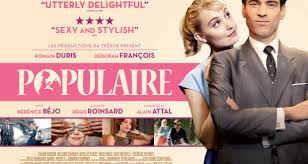 I was rather bemused, and yet somehow intrigued, by the description in the inflight movie guide. 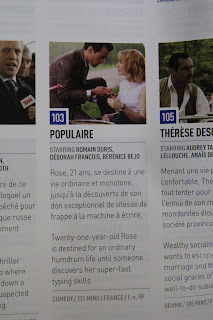 Sounds rather improbable doesn't it? But it's a sensational movie. Gorgeous 1950s styling and feel. Indeed at times it's hard to believe that it wasn't made in the 50s. Perhaps a French Mad Men? (although I've never seen any of that so wouldn't really know) Sweet. Funny. Fabulous Soundtrack. Indeed Utterly Delightful as the poster suggests.

Labels: Paris, Whiling away the hours

My brother loves to travel, but the Houston-to-Australia trip was awful for him.

I love to get great movie recommendations. Happy this one was a hit with you. Think you might be a bit biased?

Populaire looks terrific. I may have to fly to France just so I can see it earlier. (I wish!) Thanks for playing along today. I'll try not to complain about my 8 hour flight to France after your long journey. Here’s my Dreaming of France meme

Ohhh our new foxtel package has world movies - i'll definitely look out for this one.

What a great find! I'm so glad The Weinstein Company is bringing this to us. You're right about the Mad Men feel; I found this article "Mad Hommes" in WWD saying Populaire will do for France what Mad Men did in the states.
http://www.wwd.com/eye/design/mad-hommes-behind-the-scenes-of-populaire-6502948

Soooo excited to see this, thanks.
Enjoy recovering from your flight and
reveling in your photos and memories.

Thanks for the Populaire recommendation (and warning on the other!I'm always glad to "know someone who has seen it" -- beats just looking at titles and trying to decide!

I remember the posters...now I wish I'd seen it though I'm sure with out subtitles I'd be toast
Looks such fun!

Populaire combines two of my favorite themes -- French and the fifties. Looking forward to it!

Populaire looks good, and gives me hope as I can type pretty fast too!

Will have to keep an eye out for it here.