Perhaps I should try and read something more learn-ed when travelling, but I do enjoy the Horrible Histories franchise, and had already bought the London title, so it was an obvious book to include for my holiday reading. It made great reading on my Paris Gare du Nord to London St Pancras Eurostar train.

I've read a few Horrible History books now and reading London has certainly confirmed the notion that every place has a bloody, and rather Horrible history. We may now think of the English as a gentle, well mannered people but that certainly has not always been the case. Indeed they were a rather blood thirsty and brutal lot.

The Romans arrived in 55BC led by Julius Caesar, and they were to stay until 410AD. Caesar's presence is commemorated as his sword is still on the London coat of arms, and is quite visible all over the city.


It is thought that Boudicca is buried under Platform 8 at King's Cross Station.


The real Dick Whittington story does not involve a cat, the cat version was made up 200 years after his death.

The English had particularly dreadful sports and entertainments involving their animals. Bear, bull and badger baiting were practised for well over 700 years before being banned in the 19th century.

Of course their bloodthirsty nature didn't end at watching animals die hideous deaths, they were also very fond of public executions.  Most of the people to die at the Tower of London were not beheaded- 7 were beheaded inside the grounds of the Tower the rest were hung outside so that large crowds of people could watch.There was a special gibbet constructed at Tyburn so that 24 people could be hung together.

Executioners were not always precise in their acts, and sometimes relatives would tug at the dying so that they would die more quickly. It was rather fascinating to read that the body and clothes of the dead then belonged to the executioner and that the family would need to buy them back. The heads that were displayed on poles were of course prone to rotting so they were boiled in salt or painted with tar to make them last longer.

London tells us that a horrified Charles Dickens attended the executions of the Cato Street Conspirators in 1820 who were beheaded after they were hung as traitors.

There are also wonderful and gory descriptions of plague arriving in London in 1348.

And the interesting beliefs of the time: 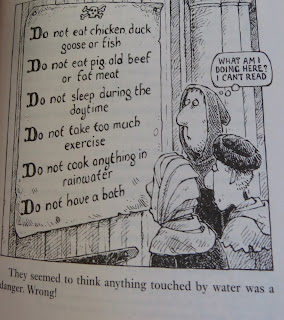 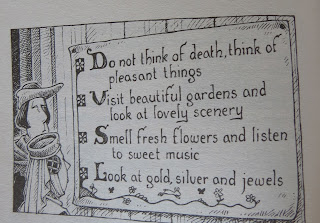 London was a perfect introduction for me.
Posted by Louise at 19:26

The cat was made up? Oh no! (I'm terribly vague about English history, despite living there 5 years, but this has shocked me. I'm generally good on cat history. ;-) )

Well, I just signed up to follow your blog because everything I've seen here totally delights me, including not only Paris but London, too!

I've been picking up some of this darker side of English history while reading the novel Quicksilver by Neal Stephenson. Your book looks like a fun way to learn history!

I love learning new things about far away places! Love your photos! Thanks for a great post!