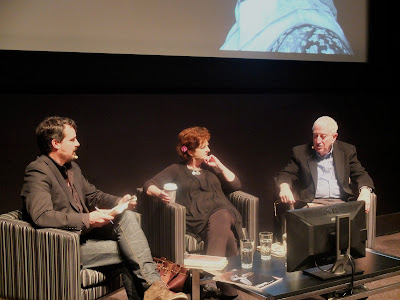 On the Wing was the final sessions that I attended for Melbourne Writers Festival 2012. Indeed it was the reason that I stayed for the entire festival duration. Who could pass up a session with Sean Dooley, Janine Burke and Peter Doherty?

Sean Dooley chaired the session, where I expected him to be more of a participant. Author himself of The Big Twitch and Anoraks to Zitting Cisticola, both of which I own, but sadly haven't read as yet. Sean did a magnificent job of introducing Janine Burke in the breathy speech of Sir David Attenborough, for whom she admits a rather extreme fondness in her latest book Nest, The Art of Birds. It was very funny.

Janine Burke is perhaps an unusual person to write about birds, as she is an art historian, biographer and novelist by trade. Although it turns out that she's done her fair share of birdwatching too. The Heide School and Sunday Reed introduced her to nature, and she has been watching birds for some time. Watching them construct nests on her afternoon walks she wondered why aren't they works of art? Birds nests are well constructed, can be beautiful and she wanted to see them again. They had all the features she appreciates in works of art produced by humans.

Janine felt that Picasso and Matisse had changed the perception of art in the twentieth century. They brought into art works that had previously been outside the definition of art- primitive and indigenous art, which had previously been housed in anthropology sections of museums, but have now moved into art galleries. Why shouldn't birds nests be seen as art, and housed in galleries? Janine Burke is actually curating an exhibition for next year which will showcase birds nests in a gallery! I hope I can get back to Melbourne to see it.

Peter Doherty is from the scientific side. Vet, scientist, winner of the Nobel Prize for Medicine, Australian of the Year. Author of three books, his new book is called Sentinel Chickens, about which you will hear more at another time. Peter sees authors as much like a bowerbird- picking up things from everywhere, and then putting them in an elaborate display called a book. He said it was common for older scientists to become very interested in the environment and ecology.

Peter said a very simple thing, that is so obvious when you think about it, but it really made me think, birds are often the only animals we see. It's true of course. Naturally if we have pets we see them more, but in the natural world birds are it. Well maybe insects if you look, but birds thankfully appear to outnumber insects in my vision at least.

There were lots of interesting bird factoids dropped into conversation during the session. Certain birds can remember where they have put up to 20,000 bits of food, and then remember their use by dates, and dig them up just as they are about to go off! Birds have the largest spatial awareness cortex of any species, which allows for the extraordinary 3D flight, when they fly in flocks.

It was a really interesting session. I've got lots more reading to do now, and a few other areas to investigate.
Posted by Louise at 08:18

It's so odd how writers tend to hang out in their own countries. In this big world, shouldn't there be more writer diversity?

In all the years I've been to the Austin Book Festival, for example, I can only remember seeing two authors who traveled there from outside the US.

It certainly was a great experience. It depends on the budget I suspect Deb. There were quite a few International authors in Melbourne for the festival. I saw a few International speakers- actually only English ones I think, but there was a better range than that. My sample wasn't totally random I suspect.