I've already done a few posts about the Melbourne Writers Festival, but it all kicked off with this one. Opening night. Always a big night. Melbourne Town Hall. 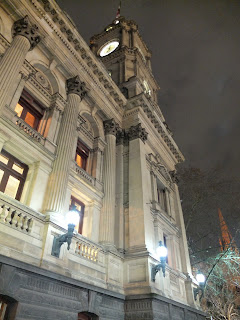 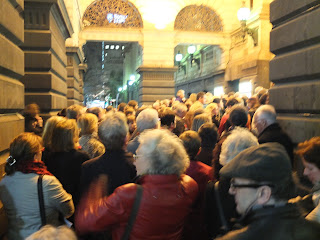 I've been to Opening Night before, another corker, Clive James back in 2007! Five years is too long between festivals. Opening Night the excitement is palpable, we're at the front end of 350 events, and they've sold 60,000 festival tickets.

Simon Callow hit the stage and the room was held spellbound. He's a magnificent orator. He spoke, without notes, in his extraordinary fashion for about an hour. Yes he knows his topic of Dickens inside and out, and I'm sure he could rattle this off on any given day. I'd seen Simon Callow's production of The Mystery of Charles Dickens 10 years ago in Sydney, so most of the material wasn't new to me, but it's still wondrous to be in the same room with such a presence. And we had fabulous seats in the front row!

Simon spoke of his introduction to Dickens as a 7 year old boy seeing a production of A Christmas Carol that scared the hell out of him. Later at 13 when afflicted with chicken pox "a medieval torture of an illness", he was in misery until his grandmother placed The Pickwick Papers in his hands. He was immediately immersed in Dickens world- huge, larger than life characters, an England that he immediately recognised. He began reading his books one after the other. And has never stopped.

Simon Callow was here this night largely to talk about Dickens and the theatre, given his new book Charles Dickens and the Great Theatre of the World. He described Dickens' public readings as a "unique and staggering theatrical experience". He had an extraordinary ear for accents, and created voice after voice, he would hardly move from the lectern. He often rewrote the texts for his public readings, or wrote new texts. He knew that his work came to life when read aloud, and Callow tells us that this sense of theatre was absolutely inherent in his work.

Queen Victoria herself was a great fan of his readings, as were the British public, who felt that Dickens spoke for them. Simon Callow believes that it was the exertions of his public readings that killed Dickens. On his final tour he had a swollen left foot, he was on crutches and could hardly walk. He finally met Queen Victoria whom he had "sedulously avoided" until that time.

Dickens forbade any statue to be erected in his honour, and to this day there is no statue of him in Britain. There's one in Sydney, but none in Britain. He wanted his books to be his monuments. I really must read them. I've only ever finished A Christmas Carol, and still say that Bleak House is the best book that I've half read twice.

If you weren't lucky enough to be at Melbourne Writers Festival, you can share in the experience with Books and Arts Daily on our Radio National who are sharing In Conversation with Simon Callow on their website, and you can listen to this wonderful man. I hope this link works internationally, but don't know if it does.
Posted by Louise at 23:59

how fun! and Simon Callow, oh my! I love him.