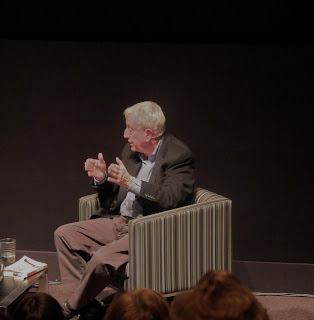 I was very interested in this session to see Nobel Prize winner Peter Doherty talk about his new book Sentinel Chickens. What a perfect combination of topics- birds and medicine- right up my alley!

Peter Doherty is a vet, scientist, winner of the Nobel Prize for Medicine (the only vet to do so as yet), and former Australian of the Year. This was an interesting and wide ranging discussion. Sentinel Chickens is "not a chook book" he advised, but more like a CSI for chickens (and other birds). An appeal for the value of science. He felt that as he got a bit older that he started to smell the roses and look at the birds. Despite the opening of the book being about Peter Doherty trying to find some puffins on a holiday in Alaska he doesn't think of himself as a birdwatcher.

Peter spoke quite a lot about influenza, all fascinating stuff. Influenza is maintained in nature in birds. I think lots of us know that. All the recent bird flu stuff. What I didn't know is that influenza is a gut infection in birds, and often quite mild. Influenza is basically a disease of water birds. These birds poo out the virus into the water, where it survives quite well in the environment. Scientists wanting to check birds for influenza infection, insert a swab into the lower portion of their gut. Urgh.

One particularly interesting discussion was about the use of voltaren (diclofenac, a non-steroidal anti-inflammatory medication) in cattle in India. Of course cattle aren't eaten in India, so I'm not really sure why they were being treated with voltaren. When the cattle die the vultures then move in, but it turns out that voltaren is extremely toxic to vultures- they die very quickly of kidney failure and visceral gout. Vulture populations have declined by 95% over the past 25 years. The decline in the vulture population lead to an increase in wild dogs and rats who were able to scavenge the cattle carcasses instead, this then has caused an increased incidence of rabies. All because cows were given some anti-inflammatories! The flow on effect of such things really can be extraordinary, and quite unimaginable. The increase in rabies is probably quite lucky for the vultures, otherwise their plight may not have come to attention, or there may not have been as much of an effort to find the cause.

I'm looking forward to reading Sentinel Chickens to read more about the plight of the Indian vultures and many other bird matters. In 1930 there was a "Parrot Panic", where hundreds of thousands of parrots were killed, and which ultimately lead to the founding of the National Institute of Health in America. Now that has to be an intriguing story too.
Posted by Louise at 22:34

In my house my husband is the science guy so I have to share this with him. These chains of events are so fascinating - and of course your blogpost title Contagion harkened back to the terror represented in that film.
I have taken 'dicloflenac' in the past - hoping the vultures stay away from me too. See you tomorrow for Saturday Snapshot although I don't have a good pic right now. Cheers! Sim