Both Doug MacLeod and Scot Gardner have published books dealing with death recently, so they had an interesting combined session at the recent Melbourne Writers Festival talking about death and the dark side. I was really keen to attend this session even though I haven't actually read anything by either of these two chaps-yet. I have been stockpiling Scot Gardner's books for some time. I heard about him many years ago and expect that I will like his work, even though I haven't actually read any of it. I've decided that about other authors too, most notably Paula Fox and Will Self. 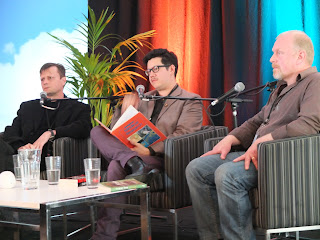 Doug MacLeod has a background in TV comedy writing and indeed, is a funny, funny man. He doesn't believe in life after death as such, and he would like to believe in ghosts but doesn't. Doug has a dark sense of humour, which he ascribed to his father being ill with cancer while he was a teenager, and that black humour helped through a difficult time, something I certainly understand.

Doug did a wonderful reading from The Life of a Teenage Bodynsatcher (a CBCA Honour Book for Older Readers in 2011). He described the mother as a steal from Oscar Wilde's Lady Bracknell, unburdened by reality, and under the effect of laudanum. It was hysterical.

Scot Gardner is not obsessed by death, but his most recent book, The Dead I Know, winner of the CBCA 2012 Book of the Year for Older Readers, is about a "goth kid working in a funeral parlour". Scot's godparents run a funeral parlour, so he had easy access to work experience. Scot based his central character on an African war survivor who had lost his entire family, and he had marveled at that young man's resilience.

He spoke about the experience of death and grieving. That death is guaranteed for all of us. That it can be a lovely thing when it's the full stop at the end to a long and joyful life. Scot felt that there was more elegance in the way people are dealt with in a funeral home than fiction allows. 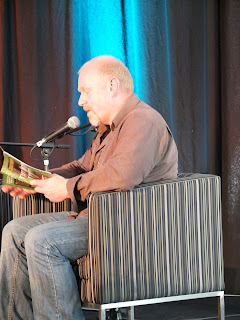 Scot also read from his book. And he also showed an extraordinary slideshow about the death of a rather large cow called Tiny on his family property. It was wonderful.
Posted by Louise at 14:32

Thanks for sharing this. We are so funny about death aren't we? It's such an unknown and scary place for some; for others, sure in their faith, they've got it wired.
I liked reading that Scot said there was more elegance in a funeral home than fiction allows!
I'll be on the lookout for these two on American bookshelves.

Yes we can be very funny about death, but it often makes rather captivating reading. I hope you have access to their books.