The whole exhibition was very interesting, but a few special items really caught my attention. Each artefact had a short blurb about the life of the author and how the object was relevant to their life. There were many extraordinary tales.

The first was a  letter written in Braille format, by Louis Braille, printed by a raphigraphe machine. A sort of early Braille typewriter. Louis Braille, was blinded in a childhood accident, and worked on his system of writing for the blind from age 12. He was to only live a short life, succumbing to TB at 43. 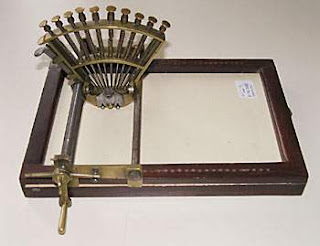 His letter was particularly beautiful. Naturally, it was written in French, and the raphigrapher printed a sort of embossed print, so that the letter just looked like embossed French, not the series of mysterious bumps that is modern Braille. So as long as my French was good enough I could read it.


There was a letter written by Wilhelm Conrad Roentgen, the German physicist who took the worlds first xrays, of his wife's hand, and would later win the first Nobel Prize in Physics in 1901. They had reproduced one of his early xrays, and it was fascinating to see that it would be seen as a bad xray these days. It's bad form to leave the rings on! I think I had seen these xrays before, but had forgotten about it.

Albert Einstein's piece was interesting. Half of it was crossed out in rather exuberant crosses. A sign of a brilliant, quick, but slightly disordered mind?


Albert Nobel was represented in the exhibition. Actually, he's been coming up for me a bit lately. You'll see why in another post soon. His letter was about one of the frequent litigations he was involved in.


Herman Hesse (who I haven't read, I've been much too chicken) renounced his German citizenship, but continued to write in his native language. He wrote and illustrated Pictor's Metamorphoses in lovely watercolours.


We also learn about the "father of chemotherapy", of crocodiles and tsetse flies, and poor Dietrich Bonhoeffer, pastor and member of the German resistance who was "strangled with a wire 3 weeks before the German capitulation."


The display of the music manuscripts was a particularly amazing experience. Each manuscript was opened out within a protective glass case. At each case you could hear the particular piece of music. So, Beethoven's 5th was playing at the case where his original score lay open (not that I can read music at all). And somehow this didn't make a cacophony of sound (well, in the occasional spot, but generally you could just hear one of them). It's still amazing to see these pieces as they were written, and a novel way to display them.


Handwritten has been a very popular exhibit at the National Library. And it's great that that is so. You can prebook your free tickets, and if you're planning to go at what would be a busy time like the weekend, then it's probably a good idea. We hadn't prebooked, and couldn't get in on the Sunday afternoon we tried to go, but easily got tickets for the 10am session the next morning. It's still a bit crowded though even with timed tickets. Make sure that you leave time to visit the adjoining exhibition Treasures of the National Library (also free entry, and with a fabulous free ipod audio tour available at the bookshop). It's well worth a look too. So much so I think I'll give it it's own post.

For those unlucky enough not to be able to go, you can get a quick taste here, or watch an ABC news video here.
Posted by Louise at 00:19

What a fascinating exhibit. I bet writing a book in Braille back then was a labor of love.

Hannah- a bit sneaky, sorry. We made a rather last minute, rather quick trip. Only in your fair city for just over 24 hours, so we didn't plan to meet up with anyone. I did accidentally bump into one friend though, which is what happens if you loiter about at the National Library it seems.

It was fascinating Kathy. I hadn't realised that Braille was quite so old, or that letters had been written in Braille back then. Amazing.

Fascinating .... I'm off to check your links right now!

I would love to see this. Perhaps it will come to the US someday.