The Magician, with bonus Catacombes photos 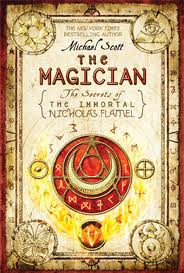 The Magician is the second in a series of six fantasy novels by Michael Scott, proclaimed as the 'King of fantasy' on the cover of each book. This has been the bed time reading for my 11 year old of late. We read the first book, The Alchemyst last year. Fantasy isn't really my genre, and I don't normally want to read long series of books. So I was wondering how I would go with this one. I'd enjoyed the first book well enough, but wondered at the staying power of my interest. Although in the past I have managed to read aloud all 21 of Enid Blyton's Famous Five, so obviously I can manage to keep going long after my interest has waned.

As expected, my interest did wane with this book. I was optimistic at the start as it is set mainly in Paris- and for me that can make up for lots of things. The Paris story line was ok, but I found myself more interested in the storyline set in San Francisco (it was better and more exciting I think). Our reading was disrupted with breaks for holidays and other things, and I think my enjoyment suffered all the more because of that. So while the action in the book takes places once again over a mere two days, it did become a bit long and drawn out as a reading experience. I found myself getting confused about which monster was which, and who smelled of what when they were doing their magic.

We did get through it though, and my son is keen to continue the series. We have three more sitting about the house, and the sixth book is due out mid year. I think his interest in fantasy is larger than mine. And that's fine. I do find it interesting how Scott has managed to blend figures from most of the major world mythologies and turn it into a modern story, and enjoy that aspect.

Much of this book was set in the Catacombes of Paris. We were lucky enough to visit the Catacombes on our last trip to Paris. We even went twice as the queue was much too long the first time we visited, so we returned early one morning to be there when they opened. They are a gloomy, weird and creepy place to visit, and makes an excellent backdrop for a fantasy story. My son really enjoyed that we had been there- even though he was a bit freaked out about it at the time! 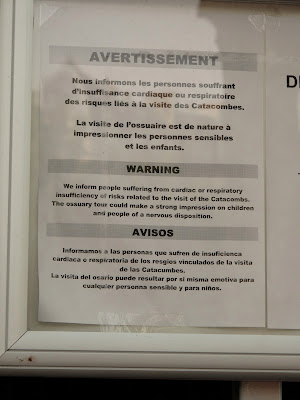 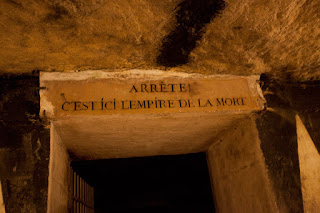 The Catacombes de Paris were created in the late 18th century because the cemeteries of Paris were overflowing, so there was nowhere to bury the recently dead. A decision was made to use the old quarries that crisscross under the city as a vast underground ossuary. It has been open to the public since 1874. It is a remarkable and sobering place to visit. It is estimated that 6-7 million people now lie interred there.
Posted by Louise at 21:30

I am not familiar with this series of books but will check them out. In all my trips to Paris I have never been to the Catacombs which is odd as I have been to many of the cemeteries. The sign of warning is very interesting! I just put this on my list for Paris.

Genie, I do think the books are so-so for the non-fantasty reader, but I hope you enjoy the Catacombes when you get the opportunity. I'm sure you'll take some amazing photos there. And whilst I've been to the Catacombes I haven't been to any of the cemeteries, but hope to fix that on my next visit.

I read the most recent one of the series a few months ago, and was just overwhelmed by the number of characters and storylines! I hope your son keeps his interest up, though--I know a lot of kids love these, so he might well!

My son's interest doesn't seem to be waning in the least Charlotte, and I think kids can keep hundreds of characters straight (at least my son can, although he struggled a bit with all the French names in the Marie Antoinette book we just finished). I hope I like the third one a bit more.