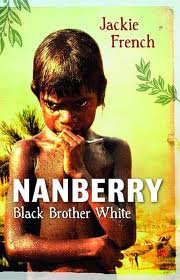 Jackie French is very famous in Australia. Not surprising as she is just about everywhere. She writes a gardening column in The Women's Weekly- one of Australia's longest running and biggest selling magazines. She used to be on the tele, not sure if she still is. She famously loves wombats and chooks. She writes picture books for children. And she has written many, many books for older children.

Whilst I've read quite a number of her picture books, and some of her gardening advice books, (although sadly I don't need much day to day advice on wombat wrangling) I'd never read any of her books for older readers. My son's teacher has been reading his Year 5 class one of French's other recent books A Waltz for Matilda this year, and he remains very taken with it. So when I saw the many glowing reviews about the place for her latest book, Nanberry, and found myself with plane tickets to cross the Pacific, and many hours of reading time, I knew that this book had to be part of my holiday reading. And I'm so glad I did. This is an absolutely fascinating book that brings the reality of life in early Sydney vividly to life.

Nanberry is an Aboriginal boy living with his family on the shores of Sydney Harbour when strange ships sail into the harbour in 1788. Soon unknown disease takes a dreadful toll on the native population and Nanberry is left sick and orphaned. He is treated and then adopted by the colony's first surgeon, John White. Nanberry comes to live with "Father White", his maid Maria and an orphaned possum. Nanberry grows up between the two cultures, black and white. At times he takes over the role of translator for the colony, when Bennelong can't. He later has an adoptive white brother, Andrew White, who is Father White's son with his common law convict wife Rachel Turner.

One of the great aspects of Nanberry, is that it is soundly based in fact. These are real people, having imagined conversations. The vast amount of research that Jackie French has done is easily woven into the story. Disease. Squalor. Poverty. Food rationing, that requires guests at the Governor's residence to bring their own bread rolls, as there was not enough in the Governor's allocation to cater for them. There is a great section of notes at the back of the back fleshing out some other details not covered in the story.

I know so little of Australia's early history that it really is shameful. Sure, I know some basics, but that's about it. I gasped when I realised that Balmain was named after someone! (William Balmain, Assistant Surgeon to White, later Principal Surgeon after White retired). It's astonishing to realise that John White was still the surgeon in Sydney when members of my family arrived on the Third Fleet in 1791, and sad to learn why several of them died so very soon after arriving.

And what an amazing world we live in that we can so easily see a digitized copy of John White's Journal of a Voyage to New South Wales! Complete with his illustrations. We don't have to travel to a great library and don white gloves to reverently inspect the manuscript, although that would be such a delight. But how easy it is to lie in bed on a sick day, with a lap top, and peer into our history like this?

Jackie French has crafted a cracking tale of life in early Sydney that is too good to leave for the kids. But I really hope the kids read it too.
Posted by Louise at 16:41

Thank you for the list of books. Have always wondered whether Captain Corelli's Mandolin.....Jackie French is a new author for me. Hope to find her picture books. It's been fun.Thanx.

She is really well worth checking out Tea. One of her most famous picture books is Diary of a Wombat. I wasn't sure how to take it at first, but now I think it's really funny.