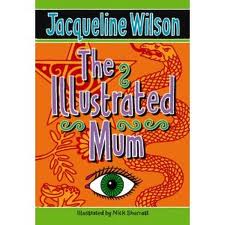 I was very excited to finally get to read a Jacqueline Wilson book. She is a children's book phenomenon. She has written over 90 books, selling more than 30 million books in the UK alone, and was Children's Laureate in the UK from 2005-2007. She has had a long term partnership with illustrator Nick Sharratt, which gives her books a very distinctive feel, much the same as the Roald Dahl/Quentin Blake partnership makes those books instantly recognisable.

Jacqueline Wilson is particularly famous for writing children's books that deal with non-traditional families with all too common problems- marital breakdown, drug and alcohol problems, mental illness. Her families aren't perfect. The Illustrated Mum is certainly one of those books. Marigold is the illustrated mum of the title. She is possibly alcoholic, she certainly drinks much more than is good for her, and she has untreated manic depression. She has two girls, Star and Dolphin, who she does love and is doing her best to bring up despite the chaos of her own internal world. Marigold uses her skin as a canvas for self-treatment and believes that each new tattoo will make things better, or at least represent her life struggles.

As with many families where the parents aren't fully around for whatever reason, the children are older and wiser beyond their years, yet still wanting their mother to love them and parent them. The girls generally take care of things- shopping, cooking, getting themselves to school, although Dolphin has taken to wearing the same black,witch dress every day to school which she thinks gives her magic powers. She and her clothes probably aren't all that clean. But she certainly loves her mum, despite the chaos and uncertainty in each and every day.

Marigold's backstory is hinted at -the abuse whilst in foster care when she was a child, stints in psychiatric hospitals, and a stream of men with whom she has tried to find happiness or love. However she is still infatuated with Micky, Star's father, and dreams and plots of getting back together with him, even though she doesn't  know where he lives. Indeed, neither girl has met their father.

I liked this story well enough, but wasn't as bowled over as I was expecting to be. Perhaps it was too much like a family I would see at work? Marigold, Star and Dolphin were certainly very real characters to me.  My copy (Corgi Yearling 2007) has an introduction by Jacqueline Wilson where she recounts her inspiration for this book. She was sitting in Central Park, New York with her daughter Emma when they noticed "a thin tattooed mother walking with two little girls in dress up clothes, tiaras in tangled hair, and skinny ankles wobbling in big silver high-heeled sandals". I certainly admire the fact that she can take this brief sighting on the street and turn it into such a thought provoking book.

I find it really interesting that this book, and indeed this style of book is so overwhelmingly popular with young girls- and clearly they are. There is no doubting that. Jacqueline Wilson gets mobbed by her many young fans whenever she makes public appearances. Perhaps kids can see more of the family striving to go forward together no matter what the difficulties? Whereas as an adult reader I concentrate on the parental short comings and see what it is doing to the children? I am definitely looking forward to reading more of Jacqueline Wilson's work.

A few times Marigold and the girls dance around singing" I should be so lucky, lucky, lucky", this is a very obvious reference to an early Kylie Minogue song (a superstar here in Australia and in the UK, but she never had all that much success in the US)- ah the 80s! Ah Stock, Aitken and Waterman! We were all so young back then....

I've never heard of this author but now I shall seek her books out at my library. Thank you!

I read her autobiography last week (at my daughter's insistence because she loves her books) - her mother clearly had a few problems.....

Satia there are certainly enough titles to pick from, I'm sure you'll find something interesting.

Kath, I've got the autobiography out of the library to have a look at. I hope I'll get time to have a look at it. She seems an unusual and interesting personality, that usually comes from somewhere.