Reading the obituaries is always interesting. You read of people's lifetime of achievements, their enduring passions, how they lived. Sometimes the people are famous of course, sometimes they're not, and that doesn't matter. Sometimes you probably should have heard of them, but haven't before their death.

John Glasby was one such man that I'd not heard of before. I've just read his London Telegraph obituary that was reprinted in the Sydney Morning Herald. John Glasby was a mild mannered chemist by day (although perhaps mention of his research on detonators and rocket propellants suggest otherwise), but in his spare time he churned out hundreds of novels and short stories across many genres. Most of his works were published under  pseudonyms so I feel less bad about not having heard of him before.

The obituary is fascinating but is less about the man than the company he wrote for. Indeed it seems that John Glasby and Reverend Lionel Fanthorpe wrote most Badger Books. A fascinating piece of publishing history to read that Badger Books would get the cover art first, and then get the author to write the story for it- often over a weekend! I'm not exactly certain that this is how high art is usually crafted. I don't know that I'd heard of Badger Books particularly before either, but the style of cover is certainly immediately recognisable. 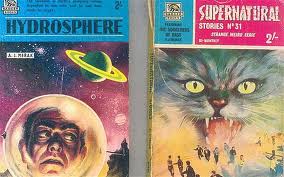 I'm sure we've all seen them, even though Badger Books stopped publishing in 1967. My library has 10 John Glasby books- all in large print format- I guess he's popular with the older readership. I'm going to keep an eye out for one of his books. I'm always astonished at the authors who published hundreds and hundreds of titles. Barbara Cartland was like that too. I read one of her books, simply because she had published 700+ titles. It wasn't as bad as I was expecting but I wouldn't want to read 100 of them, let alone 700.
Posted by Louise at 09:06

Ah, as you now know my Dad and I are obituary readers ... and as you say you sometimes wonder why you didn't know about these people before hand.

I've just read a blog post by bookphilia in which she complained about Trollope - in his autobiography he said that deadlines were so important to him that he'd send off works that he felt were not yet good. BUT I don't expect he wrote them over a weekend to suit a cover! That's a bit too artificial for me

I couldn't believe the strategy of writing to cover art! Although it was commercially successful. I guess if you do something 300+ times, then you probably enjoy it. It's not like he didn't have a day job and needed the writing gig to keep hunger from the door!

To me, it seems almost unbelievable that someone could write that many books. Good books or bad books, that's a lot of writing!