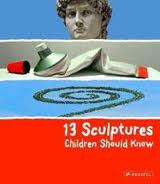 My love affair with this series continues. As does my art education. Here I knew 33% of the cover art, hardly an achievement given that Michelangelo's David is possibly the most famous sculpture in the world.

I shall concentrate on the three Parisian sculptures, just because I can. I have been lucky enough to see the Winged Victory of Samothrace twice now on visits to her home in the Louvre. 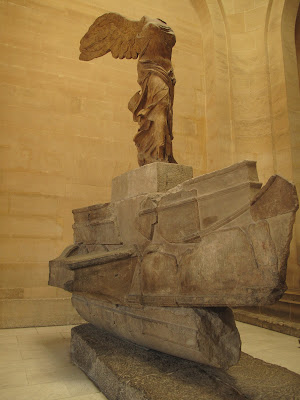 But I didn't know that she was a depiction of the Goddess of Victory, Nike (or indeed why that is the name of a shoe company). She is beautiful and certainly awe inspiring as she is given pride of place at the top of a flight of stairs in the Louvre. 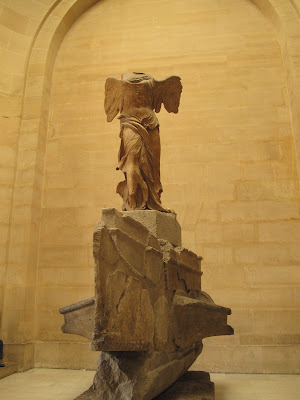 I wasn't familiar with Rodin's Burghers of Calais, despite visiting the Rodin Museum last year. We didn't get to go inside the house, it may be in there, or perhaps we missed it in the grounds. An excellent excuse to plan a return visit anyway. Ah, no, it's outside.


The Burghers of Calais is fascinating for a number of reasons. It does depict the surrender of Calais in 1347 to the English during the Hundred Year War. Which is an unusual moment for the city of Calais to want to memorialise in such a way. The original is in Calais, 12 copies have been made (most of which were after Rodin's death) which are on display around the world.

The third Parisian sculpture is again one I haven't seen, but only because of my dislike of the architecture of the Centre Georges Pompidou. I've glimpsed it down the rue, but never been interested enough to go a few blocks out of my way. Next time in Paris, I shall have to make the detour. Because lurking nearby is the Stravinsky Fountain created by husband and wife team, Niki de Saint Phalle (the only likely female sculptor I can see in this book) and Jean Tinguely.

I'm not sure if I like it, but now I will have to see it for myself.

Happily, I've seen two of the three from Paris. And that's all. And probably all I'll ever see.

Yes I suspect we adults should know them too. Which two did you see in Paris? Nike I suspect when you were at the Louvre? And the Stravinsky? I don't remember you saying you went to the Rodin museum.

...I'd add Rodin's 'The Thinker' too and blush to admit that apart from the Paris ones, I don't think I've seen the others on your list :)

I am so passionate about children's literature (and non-fiction). I just ordered all three of these books from A!

I have some little people who know many of the buildings and probably the artists (5 or 6).

Thank you for your review(s).

Kath, I'm not sure why they chose The Burghers of Calais over The Thinker. But I'm glad they did I guess, I learnt a lot about a statue and an event that I knew nothing of, and it will add more pleasure to my next visit to the Musee Rodin, whenever that is.

Oh Genie, I'm so excited. I hope you and your little people enjoy them. I have now depleted the available titles in our local library. I bought a few others that I was most keen to read too. It's such a great range of books, and beautifully presented too.

I've seen the first two. Winged Victory is beautiful and awe-inspiring up close. My favorite sculpture is The Kiss by Rodin. I was so so excited to get to visit the Rodin museum. I'm sorry you didn't get to go in the house. It is lovely.

Ah but Jehara it gives me the perfect excuse to go back! I'm looking forward to revisiting the Rodin museum now, when I wasn't all that inspired before the first visit- it was my husband who wanted to go. Now I know better.