It's a strange experience watching such a famous movie as Breakfast at Tiffany's. The images of Audrey Hepburn/Holly Golightly are so iconic, that all her outfits look familiar. Holly's gorgeous LBD from the opening scene. 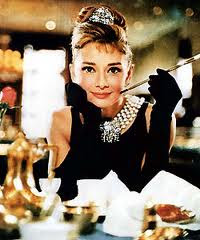 That fabulous hat that Holly wears to visit Sing Sing. 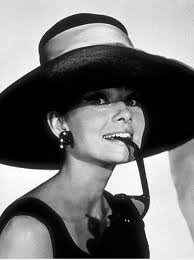 Although mercifully, images of this hat appear to be not so commonplace. 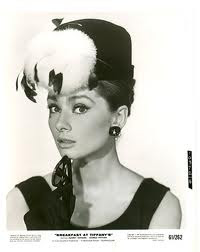 It's like she ran into one of those fancy chickens while rushing around a corner and somehow the poor creature got impaled on her forehead.

These images are all so commonplace, so absolutely iconic, that it makes you think you have seen the movie, when in fact you haven't seen it at all. You know it's set in New York. You know that she has a thing for Tiffany's. You know that there's something vaguely unseemly about it all. The familiarity makes you think that you know the story. And then it starts, and clearly, you've never seen the movie, and in fact have absolutely no idea what it is about.

You have no idea that it is associated with Moon River. You have no idea that Holly Golightly is quite loopy, and refuses to name her cat (who plays more than a minor role in the movie) because of the possible impermanence. And then it was so exciting to later discover that Orangey the talented cat actor, won two feline Oscars for his work. 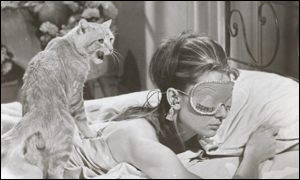 As a long term shiftworker I can't but help but coveting her alluring eyemask and ear plugs with tassels.

Breakfast at Tiffany's is a great movie to watch, and an excellent way for my friend and I to kick off our Audrey Hepburn phase, watching Movies Made Before We Were Born. There is an intriguing morality to this movie, which belies the Truman Capote novella I suspect- a novella that I now most definitely want to read.
Posted by Louise at 22:47

Labels: Audrey Hepburn, Movie Made Before I Was Born

I love old movies, mostly from the 30ies and 40ies, but this is one of my favorites from somewhat later. I love Audrey Hepburn in just about everything she did: Sabrina, Charade, Love in the Afternoon are my other favorites.

You must read the book now that you have seen the movie. And read Christmas Memory by Capote, too, while you are at it. I hope you like him as much as I do.

Susan, I'm planning on watching all of Audrey Hepburn's movies with a friend. This was our first. I think I've seen bits and pieces along the way, but we're going to do it slightly more consistently.

Debbie, I've read In Cold Blood a few years ago when BGL did it and was very impressed with the writing. I'm sure I'll enjoy Breakfast at Tiffany's. I heard about Christmas Memory last year when I was doing a bit of seasonal Christmas reading and it sounded intriguing. I don't think I've ever seen it about, but once you're looking for things they do tend to just turn up sometimes don't they?

Hhat a great post! I adore old movies and cannot think of a nicer way to pass a rainy afternoon :-)

I know I've read the book and actually think I may have seen the movie years ago. I guess I should watch it again just to be sure.

Favourite film of all time! (Closely followed by Roman Holiday, then Funny Face. If you love Paris, you'll adore Funny Face) And for the time in wich it was made, some rather risque themes - sugar daddies, gigolos, affairs, secret marriages.... after night duty I often wished for a pair of those fabulous earplugs too.

A very worthwhile pursuit to see all her films, bravo!

Watching old movies is a fabulous way to while away any afteroon I think Leanne- rainy or not. We actually had a nice spot of dinner, some bubbly and a fabulous evening.

I'm sure it would be a movie that would repay another view Kathy.

Fiona- favourite movie ever! WOW, big call. My favourite movie is not nearly so high brow- actually it would be a toss up between Wayne's World (one of those right place, right time movies) and Monty Python's Holy Grail. I don't have Roman Holiday or Funny Face yet! I've got Sabrina, Paris When it Sizzles (I do love Paris) and War and Peace patiently waiting for viewing time.