The Lambs of London

I love reading detours, the wonderful paths we happen along, diverting us from what we feel we should really be reading, but enriching our reading just the same. This is the tale of such a diversion.

Recently I started what will be a rather slow read of Charles and Mary Lamb's Tales From Shakespeare.

An extraordinary book, in print since its publication in 1807, written by two rather extraordinary authors. A cursory Google about the Lambs was enough to be intriguing. Mary suffered bouts of mental illness and stabbed and killed her mother in 1796. Charles, an essayist and writer, also had periods of mental instability, but looked after his sister after her crime, and died of erysipelas, aged 59, another tragedy of the pre-antibiotic era.

My literary detour was to read The Lambs of London by Peter Ackroyd which I discovered on my library catalogue. 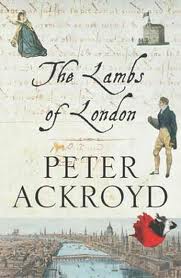 I've long been intrigued by Peter Ackroyd's books. He is a biographer of Dickens amongst many, has written about Oscar Wilde, and has written massive tomes about London, which I know that if I ever get to visit the opportunity to visit London, I will be dreadfully keen to read. Here was a much shorter book in which I could dip my reading toes and partially satisfy curiosity about Ackroyd, about London and the Lambs all at once!

Well, that was the plan. Certainly, Charles and Mary Lamb are major characters in The Lambs of London. But the book isn't really about them. It is much more about William and Samuel Ireland, but The Irelands of London would not have drawn me in quite so easily.

It's not that there isn't warning. It's right there on the first page:

This is not a biography but a work of fiction. I have invented characters, and changed the life of the Lamb family for the sake of the larger narrative.

I guess I really should have read a biography of the Lambs instead. That's what I'm really interested in. I found this work of historical fiction frustrating and ultimately unsatisfying. Not that it was a bad book, it's not. It's just not the book I wanted to read. I'm not sure about his motivation. I think the Lambs must have had quite a fascinating enough life of their own. I'm not sure why Ackroyd needed a "larger narrative".

Charles Lamb is working as a clerk at the East India Company, when he buys a book from William Ireland, who is working in his father's bookstore. Charles and Mary befriend William, and share his passion for all things Shakespeare. Charles does blame Mary's friendship with William for her increasing restlessness. Perhaps this is why Ackroyd needs the larger narrative supplied by the Irelands? To explain Mary's illness. But can't it just be a mental illness?

Many of the literary references went sailing past my head, but these didn't interfere with the story too much. It seems clerks of 18th century London were much better read than modern day doctors. There was just too much William Ireland for a book I wanted to be about Charles and Mary Lamb. I was rather peeved at one point when a beggar removes a fake goitre from her face (!). Goitres of course are growths arising from the thyroid gland in the neck, and not from the face. I've tried to find something about goitres being on faces in the 18th century, but haven't found anything to support this use, but did come across some rather interesting stuff. 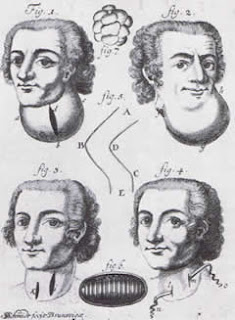 The picture is from a fascinating article about the historical treatment of goitres. I really wonder how the belief started that the touch of a dead mans hand would be curative for a goitre? Now that's astonishing. And not quite where I expected this post to go, but you just never know where life, or reading, or blogs, will take you, do you?
Posted by Louise at 22:44

Yes, this is what I like about reading, the casual and (somewhat) causal way one book leads to another.

Thank god for iodine is all I can say. Fascinating.Now I'm desperate to know more about the Lambs....can you recommend a good biography you came across in your meanderings?

I'm sorry your detour didn't lead you to something you would have enjoyed more.

Debbie- it's amazing the connections between books, and the little pockets of knowledge you come across. And their connectivity.

Fiona- my library has what seems to be the most recent biography of The Lambs- Sarah Burton's A Double LIfe. Fairly available here, not sure about in China of course! I came across a fascinating review of it just now- and now I'm even more keen to read it, oh when to fit it in?
http://www.independent.co.uk/arts-entertainment/books/reviews/a-double-life-a-biography-of-charles-and-mary-lamb-by-sarah-burton-536308.html

Ah, but Kathy it did give me stacks of interesting and new words! And it wasn't a bad book, just not the book I really wanted to read.

Now you've made me interested in the Lambs. I usually prefer historical fiction to biography, but in this case I might have to chase down the biography.

They are such an intriguing pair I think Susan. I hope to read the biography at some stage. I'd love to hear your thoughts about it if you get to it first of course.

Exactly! I tend to agree with you about fiction vs biographies. I read both types about Rudolf Nureyev, Dancer (fiction) and then Julie Kavanaugh's biography. The fiction was an easier read, but lacked the richness of historical perspective of the biography.

Have a wonderful weekend,
Genie

Genie, thanks for visiting. It's funny but I've never been much of a reader of either biography or historical fiction. I'm becoming a bit more interested in both recently. Just what I don't need- more books on the TBR!