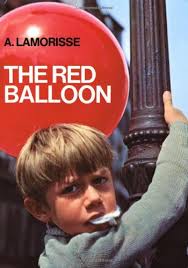 I only really learnt something of this book in 2016 when I made my list of Children's Books Set in Paris. I was immediately intrigued by the cover and bought it online that day.

The Red Balloon was the first book that I read for my first Dewey's 24 hour readathon back in October 2016. And I found it really disappointing.

The Red Balloon is actually still photos from a film of the same name and is surely one of the earliest movie tie-ins. The production quality of the book is really quite poor and the translation is terrible.


Now usually when you let a balloon go, it flies away. But Pascal's balloon stayed outside the window, and the two of them looked at each other through the glass. Pascal was surprised that his balloon hadn't flown away, but not really as surprised as all that. Friends will do all kinds of things for you. If the friend happens to be a balloon, it doesn't fly away.

Still the concept is delightful even if the execution falls somewhat short of the mark.  What child wouldn't love a balloon friend who will wait for him or her while they're at school and not fly away when your mother throws it out?

Then even more recently I discovered the 1956 film was available on SBS On Demand (this post has been languishing half-formed for quite some time, and sadly it's not On Demand any more, but it is on Youtube).  A mere 34 minutes long it won an Oscar for Best Original Screenplay and many other prestigious prizes including the Palme D'Or for Best Short Film at Cannes. It remains the only short film to win the Oscar for Best Original Screenplay!

This is one of those rare situations where the movie is so, so much better than the book.

The Red Balloon movie is a fascinating glimpse into a 1950s Paris which seems a far grimier Paris than the one we enjoy today. Wiki tells us that it was filmed in a part of Belleville that has since been largely demolished. It is an almost a silent movie with very little dialogue.

And now I see that there is a modern homage to The Red Balloon - The Flight of the Red Balloon/Le Voyage de Ballon Rouge (2008), the first French film by Taiwanese director  Hou Hsaio-Hsien.


I suspect that I'll be watching this sometime soon. It's currently on SBS On Demand for those in Australia.

Balloons are still a big deal in Paris. Australian Anna Dawson moved to Paris and started walking around with a pink balloon, now she is an Instagram star with more than 135, 000 followers.

Paris By the Book is the story of a woman who loved The Red Balloon movie so much that wanted to become a filmmaker because of it.

Because The Red Balloon movie is such an important part of the book, I felt like I needed to watch it when I was reading PBTB. So I did. I, like the main character in PBTB, remember watching The Red Balloon at school on a day when we couldn't go outdoors for recess. It's a lovely movie.

Of course it's impossible to find a copy of the book. I'm glad the movie is better. I think I won't bother with the book.

You remind me that I've been meaning to see "The Red Balloon" forever! Maybe this year.

It's not surprising that they made a bad book from a good film -- my experience is that spinning a book from a movie is usually the work of someone corporate who just wants to get more money from the effort. I think that Disney was creating "Little Golden Books" of kids' films well before 1957 when "The Red Balloon" appeared. With "The Hunchback of Notre Dame" and "Alice in Wonderland" and "Winnie the Pooh" they made films from good movies and then made books based on their own movies: full circle!

Not very Paris in July of me, but I now have that 80's song 99 Red Balloons stuck in my head!!

I think the Red Balloon book might need a new version with illustrations. It's so hard to compare book with movie and that looks like it calls for magical illustrations rather than photos. But yes, the film is a gem.

My husband was talking about this movie just the other day. He loves it. I'm going to have to give it a go because it sounds interesting.