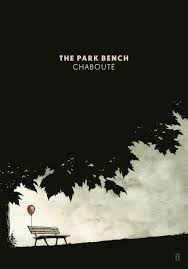 Chabouté sounded like a French name which added to the appeal, and indeed it is. Christophe Chabouté is a French author and artist who seems to have had at least three of his books published in English this year. Not that The Park Bench requires all that much in the way of translation. An essentially wordless graphic novel (or rather more excitingly a Bande Dessinée, and it's my first Bande Dessinée), there is very little English- some graffiti, a few newspaper headlines.

It would be fascinating to find and compare the original French version Un peu de bois et d'acier (oh dear, I actually think the English title is better). Actually there is no translator credited and the words appear in the actual images so perhaps Chabouté himself needed to redraw the particular drawings that contained words. It would be fascinating to know, but I suspect he did. I do wonder what the sad old Barbara Cartland reading lady reads in the French version. 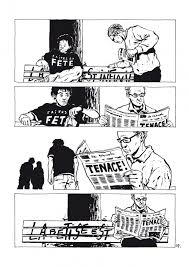 The Park Bench uses an ordinary looking park bench in an unnamed  park to share the lives of the many people who use the park- those who quickly walk past on their way to work, those who have the time to sit and read or sit and share a patisserie, those who skateboard over the bench, the dog who likes to raise a leg on it. There is a homeless man who wants to sleep on the bench and a gendarme who chases him away each night, and as someone who has inadvertently transgressed the rules in a French park it is very true that justice is swift. I love that the park maintenance man is never seen without a cigarette dangling from his lips.

The French use their parks in many different ways, Parisians leave their apartments and enjoy the extra space, the beauty and atmosphere in the parks as an extension of their home (see my glorious Sunday afternoon in the Luxembourg Gardens). I remembered all of this and more as I read The Park Bench. It's a beautiful celebration of community and life in all its forms, and a contemplation on the passage of time and progress. In a beautiful example of art imitating life The Park Bench was given away on some park benches in London. 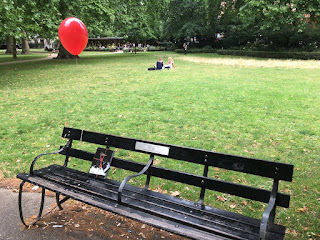 Completely drawn in black and white The Park Bench is a very eye catching book. While I was reading I was aware that while it was a super quick read, it must have taken Chabouté quite a time to create the book. There's a French film (and a concert)! This guy has made an animated film of the book it seems, and taken liberties by adding red.

I'm very pleased to have discovered Chabouté and will be avidly searching out more of his books, in English and in French.

Louise, What a unique idea for a book. I'll look for it. Thanks for playing along with Dreaming of France.
We have housesits set up January through March for our move in 2018. Then we're going to get serious about buying a house in March and April. Hopefully, by the time summer rolls around, we'll be ensconced in a French house, busy making it a cozy home and watching the tourists venture into southern France.

Fascinating post; I've never heard of a bande dessinee but now I'm really intrigued. I really enjoyed the book trailer as well, now is not the best time to see floating red balloons here in the US anyway as the film IT is out (or about to come out) and the sight of a red balloon just instills terror.
Thanks for stopping by my Dreaming of France post, always good to read your comments.

Paulita- oh wow, it's really happening! And in January!! That's so soon....Congratulations. It is a unique idea for a book, I really liked it.

Sim- BDs are huge in France, lots of shops, and they seem to break with the tradition of rather austere, same-same French book covers. IT is out here too (although there's no way I'll ever see it...) but I hadn't made the connection!

How intriguing. Haven't heard about this author/illustrator at all.

I just finished a book about manga/anime - we must be en trend!!

Love the idea for the book. I'm sure I'll never find it here, sadly.