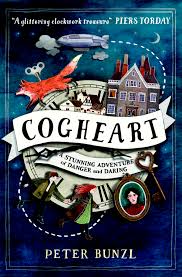 It's January 12 and I've finally finished my first book of 2017! Which is also my last book of 2016 because I actually started it way back on Dec 23. Yes, it took me three weeks to read a 362 middle grade book. Which is not the books fault at all, not at all, it's mine. At 21 days to read a mere 362 pages it's a paltry average of 17 pages a day- which is a pretty dismal effort on my part, and sadly my reading of the book suffered for it. I'm not in a reading slump so much as having too much non-reading to do, and only being able to sneak in a few pages before I fall asleep each night.

Cogheart is the debut book from Peter Bunzl, filmmaker and author. I think I heard about it on twitter over the past few months, and then I saw it available in my local bookshop in December and I had to buy it immediately, and then it leapt to the top of my reading pile and I chose it for my Sydney Christmas read. Well that was the intention.

Thirteen year old Lily Grantham is a student at Miss Octavia Scrimshaw's Finishing Academy for Young Ladies in a "wild corner of England" in 1906. Her mother had died a number of years earlier and her father had "chosen to send her to the school after she'd frustrated a number of governesses".

Lily had long ago noticed the other girls never read in posture class. It seemed thinking and walking simultaneously was too difficult for them. She doubted if a single important thought ever floated through their minds.

Her father is also an inventor of some note and a recluse. He goes missing in an airship accident at the very start of the book, and Lily falls under the guardianship of her father's French housekeeper Madame Verdigris. Naturally I quite liked the sprinkling of French phrases scattered throughout her dialogue, although I always wonder what kids make of this, if they just skim over it, or they infer some meaning from context.

"Ça suffit!" Madame grabbed her arms and pressed them against her chest. Her long nails dug into Lily's wrists and get teardrop earrings swung wildly as she dragged Lily away from the door and threw her down on her bed.

I don't think that I've ever read anything that might possibly be considered steampunk before, and I was a bit nervous about whether I would like it as a style. I don't know why now. I just loved the mix of Victorian London, zeppelins, windup mechanimals (who wouldn't love a windup fox like Malkin?) and villainous hybrid chaps with silver eyes. It's interesting that Peter Bunzl is a filmmaker I think Cogheart would make a fabulous animated movie. There are some terrific action scenes and Peter Bunzl doesn't shy away from scaring the kids a bit.

A shudder ran through her as his broken face surfaced in her memory, like a corpse floating from the depths of a glinting pond.

At times Cogeheart stirred memories of Asimov's Laws of Robotics from decades ago when I read much more science fiction than I do now.

'It's the first rule of mechanics, Robert: a mech cannot kill a human or seriously harm them."

I briefly wondered what it would be like to reread Asimov now, but I don't have the time.

The sequel to Cogheart, Moonlocket will be out sometime this year. I'll be looking forward to it.