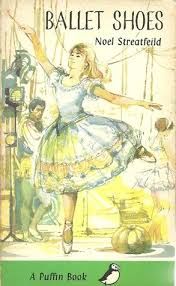 I'd been looking forward to reading Ballet Shoes for some time, and presumed that I would love it. For some reason I thought I would find it a bit like The Secret Garden i.e. just delightful (see my review). Noel Streatfeild wrote one of my favourite books of my childhood- The Children of Primrose Lane- still one of my earliest memories of reading. I remember reading it over and over again. I don't remember the story all now, but I remember the book itself. Indeed, my original copy has survived my childhood and still sits on my bookshelves. I've been meaning to reread it after I fell in love with Ballet Shoes, but now I'm a bit worried that it might spoil the memories.

I found it boring. It was a bit of a slog to get through. I found the tone so passive that I had to push myself to spend any time at all reading it and I was constantly eyeing off other books that I could have been reading, and enjoying, instead.

Ballet Shoes tells the story of three orphaned girls found in remote parts of the world and brought back to London by their benefactor and guardian, Great-Uncle Matthew, or Gum as the girls call him. Gum is a fossil collector and explorer who has a large house "at the far end of the longest road in London" where he deposits the girls and leaves them in the care of his great-niece Sylvia and Nana, her nurse.


Gum had been a very important person. He had collected some of the finest fossils in the world, and though to many people fossils may not seem to be very interesting things to collect, there are others who find them as absorbing as sensible collections, such as stamps.


The girls are brought up by Sylvia and Nana as Gum, whilst beloved by all, has left them alone without the funds to go on. It's the 1930s and things are tight. Although they go to Harrods for a new dress when needed, but spend much of their time walking to the Victoria and Albert and back. The V&A was mentioned a lot and each time made me think of my visit there in 2013.

I did find some historical aspects rather interesting. The girls all attend Madame Fidolia's Children's Academy of Dancing and Stage Training and much of the book is taken up of rather intricate detail of the practicalities of their lessons. But as each girl turns 12 they are allowed to work in the theatre, and they must apply for a Licence to do so from the city of London. This seemed a highly regulated process, and there was even a copy of the Application for Licence included, which seemed an unusual feature for a book originally published in 1936. 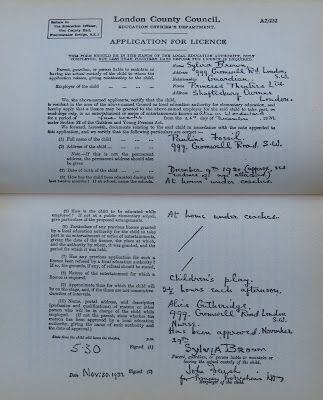 Also intersting was that the death of a king (King George V in January 1936) could have a profound effect on how long a show would run. The populace of London were so saddened by his death that "Nobody felt in the mood for pantomimes." It's hard to imagine that now.


Whooping cough is a miserable disease, but if you must have it, the worst place is the Cromwell Road; it is so far from the Parks and any place where you can whoop nicely in private. They spent the first part of having it in bed, but after a bit they got well enough to get up, and then it was most dressing. The weather was ghastly- very cold, with those sort of winds which cut your legs and face, and often it rained and sometimes half snowed, and they whooped too much to go on an underground, or a bus, and they were all cross, and they got tireder and tireder of walking to the Victoria and Albert and back.


I did find Ballet Shoes disappointing overall in the end. There just wasn’t enough hook into the story for me I think. And I was never that interested in the girls story, which is surprising as it started out so well- 3 orphans in quick succession in the first chapter!


And can Kathleen Kelly have been wrong all these years?

The particular scene isn’t in that montage, but at one stage in You’ve Got Mail Kathleen Kelly says:

“I'd start with Ballet Shoes, it's my favorite; although Skating Shoes is completely wonderful.”

Sorry to hear you didn't enjoy it, but each to their own. I loved it. I loved the gentleness and whimsy. I liked that there was a girl who would rather play with cars than do dance and acting - written in the 1930s. The era in which it was set was fascinating. In our time Sylvia could have got a part time job - goodness knows, she is efficient enough - but someone of her class in those days just had to find ways to make the money stretch, and the girls had to get jobs in the theatre - imagine an era when that would be an option!

And it must have worked as a story, because a few years ago it was made into a TV serial, with Emma Watson as Pauline. They don't do that with dull stories, not if they want ratings. ;-) Perhaps you should try the visual version and see if that works better for you.

I loved this as a young girl - I loved girls stories, I loved school stories, I loved ballet stories, and this put them all together. I read a lot of Noel Streatfield. But, I would never have thought of her books as ones that would cross-over well between children and adults like, say, Roald Dahl or even John Marsden whose books I read as an adult. So, I'm not really surprised - and I'm not offended either! I will just keep my cosy glow re books I loved when I was young and leave them there.

(And remember, I won't know whether you've responded or not so I apologise in advance if I don't engage in a conversation!)

bonjour Louise, talking about mail, it's hard to find a way of contact you. I saw an email address on your full profile link, but not sure it's valid, haven't got any answer.
it was to inform you about this great news, that you have not seen apparently: https://wordsandpeace.com/2017/01/14/french-bingo-and-comments-winners/
please contact me through email at ehc16e at yahoo dot com