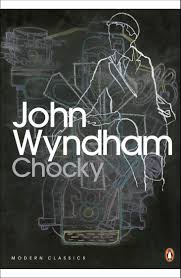 I went through quite a John Wyndham phase as a young reader, and think that I read most if not all of his books. So I think that I probably read Chocky back then, but I had no specific  memories of the story. However it all did feel vaguely familiar as I was reading.

Chocky is an unusual book. The story of 11 year old Matthew Gore, who is an ordinary boy, living with his adoptive parents and his younger sister Polly. Matthew starts talking to himself in odd ways and asking even more unusual questions than 11 year old boys normally ask, like "Where is Earth?" and "Why aren't there eight days in a week instead of seven?". His parents worry about him and fear that it's more than an imaginary friend, and consult some psychiatrists, who aren't on the whole that helpful. Our narrator is Matthew's father, which is quite an unusual approach in itself.

I found the "action" of Chocky a bit of a slow simmer really. I'm still not quite sure what I thought of it. It feels much older than the 1968 publication date would suggest. It has much more of a 1950s cold war feel. Mrs Gore is always knitting, being worried, and drinking sherry of an evening. Mr Gore has "his club". I found the writing a bit aloof. Wyndham is often damned with faint praise- his friend Brian Aldiss, a big name in science fiction himself, refers to his stories as cozy catastrophes. Which I think is a little harsh for a man who wrote some of the classics of mid 20th century science fiction- The Day of the Triffids, The Midwich Cuckoos and The Kraken Wakes.

There is a fascinating BBC documentary, John Wyndham: The Invisible Man of Science Fiction that discusses Wyndham's major works (although sadly not Chocky) in the context of his life and the political and scientific thoughts of the cold war. It's available on youtube in 6 parts. It's well worth watching.

I'm not sure that Chocky was written for children, none of John Wyndham's other works were- although in the BBC documentary I think it's is nun friend who says that he didn't want to put anything overtly sexual in any of his books- he wanted anyone to be able to read them. Perhaps it is this chaste approach and the domestic setting that leads to the rather dismissive "cozy catastrophe" term.

We really do share so many similar reading habits Louise.
I also went through a Wyndham phase in my late teens and I did classify them in my mind as a 'comfort read' - they were quick, easy reads with nothing too gory or disturbing.
I'd love to reread all of them one day.

I think I'm getting Chocky mixed up with the story about the blue-eyed children? Or are they the same?