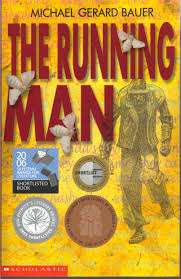 I saw Michael Gerard Bauer speak at the CBCA Conference in Canberra last year. I meant to write about that, I really did, but time being what it is I haven't. He was engaging and funny, and I was keen to read his work, but now I've finally had the chance to start, and what a start it's been. It's almost disappointing to like a book this much when it's the first you've read from a certain author because most often you don't find another that you like more. Can he have written a better book than this? Or will I read each one hoping for another Running Man? When I really should just have read Running Man again? Too much? Maybe.

The Running Man was Michael Gerard Bauer's debut novel back in 2004. I have been meaning to read it for some time and am thrilled that I got the chance recently. It's a great read. The Queensland setting and a boy with an absent parent brought back memories of the equally exceptional Steven Herrick's By the River coincidentally from 2004 (see my review) although the two stories are actually very different.

The Running Man has an unusual premise. Fourteen year old Joseph Davidson lives in quiet suburban Brisbane with his Mum. His Dad is away most of the time working on remote construction projects in a kind of fly-in fly-out way, although he never seems to fly out, and only makes it home for a short time at Christmas.

The story starts at a funeral. Joseph is sitting in the front row of a funeral at the start of the book.


He had been to funerals in the past, but it was different when you sat in the front pew. Before he had been just one in a crowd of restless schoolboys lining a street for someone whose face he would later struggle to recall. Now he was at the centre of it all, and it encircled and held him like an unwelcome and unyielding embrace.

We the reader don't know who lies in that coffin in St Jude's Church. The story then goes back three months and leads towards the funeral at the end of the book.

Over this time Joseph has to paint a portrait for a school project, and through this he comes to know his shy, reclusive neighbour Tom Leyton. Tom's reclusive life has made him the object of much neighbourhood speculation, rumour and innuendo. Joseph becomes more nervous about meeting Tom.


The following Saturday Joseph found himself walking slowly across Leyton's big backyard towards their old timber house. Images of the previous week flickered in his mind like a badly edited video clip. Mrs Mossop's disapproving frown, his mother's scarcely hidden fear, and Caroline's grateful smile all jostled for position, along with his own growing dread.


Everyone in The Running Man is a wonderfully drawn character. I felt I knew these people. Joseph, his Mum, the gossipy old neighbour Mrs Mossop. Even Tom Leyton, the odd neighbour hiding from the world and raising silkworms. I loved the silkworm aspects of the story, it certainly brought back memories of my own shoeboxes stuffed with mulberry leaves, and they make a great metaphor for life.


'They mirror what life is really like,' Tom Leyton explained. 'They are born, they live and they die. Their life has no purpose, no meaning. And they go on with their pointless existence in blissful ignorance until someone tosses them in a rubbish bin.'


Silkworms also of course raise the inevitability of metamorphosis and change. The Running Man is fabulous. There is just so much here- family, war, miracles, tragedy and friendship. It's one of those books that you already think about rereading it on the way through, and know that you will when you close the covers for the last time. I read a library copy, I think I'll buy my own and put it on the shelf next to By the River for when I want to reread them. I know I will.