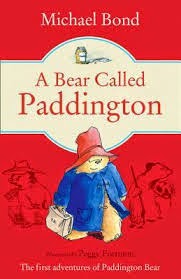 I was delighted to finally make my acquaintance with Paddington this month. It's hard to believe that I could have missed such an enduring cultural icon in my own childhood. But I did. But I'm making up for lost time now.

A Bear Called Paddington is a delightful book, and Paddington Bear is truly worthy of his cult status. One warm summer day Paddington turns up on Paddington Station (clearly where he gets his name) with a tag round his neck, an old, battered suitcase and a jar of marmalade, mostly eaten.

Paddington emigrated from "Darkest Peru" after his Aunt Lucy had to go into a home for retired bears. Paddington goes home with the Brown family, and so begins a series of delightful, charming stories. I really enjoyed A Bear Called Paddington. Simple tales, of a naughty bear who gets into mischief each chapter. He always has sticky whiskers and it's easy to see why these have delighted children for decades. I’m quite sure my son would have enjoyed this as a read aloud book when he was young.

Michael Bond didn't intend to write a book when he doodled in 1958, but ten days later the first of many Paddington books was written. Paddington was inspired to some extent by the children evacuated from London during WWII.


"When I was small, I had memories of children being evacuated from London with a label around their necks and all their possessions in a suitcase, and this became part of Paddington as well". Like you I have completely missed Paddington - your review makes me think I will save him for my youngest niece and nephew to enjoy in a year of two.

Merry Christmas Louise.
I hope your 4 days off are relaxing and filled with family fun xo