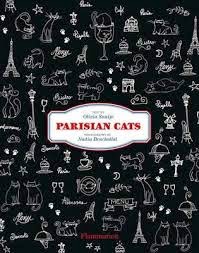 I found this delightful gem of a book sitting on the shelf at my local bookstore (in the animals section, it does pay to browse). I'd never heard of it before, but I snatched it off the shelf without even peeking inside, and it was mine. I knew that I'd love it. There's something about books about cats. My first blog post was about a cat. Eventually I read the book version, Making the Rounds with Oscar. And we've thought about The French Cat before.

Olivia Snaije is a Paris based journalist who normally focuses on the more important issues regarding the Middle East. But clearly she is a cat lover who began noticing the many privileged cats living in the shops, restaurants and cafes of Paris.

These cats have not only become the mascots of their establishments, they live in the city's loveliest or most historical and culturally rich neighbourhoods, spending their days roaming seventeenth-century gardens or cavorting in the nineteenth-century Grand Palais.


Parisian Cats showcases 18 cats living the life of Riley at their various abodes. Many of the cats arrived on their own to their residence but a few were brought to Paris from the French countryside, and one was from an animal shelter. The cats serve as mousers, as companions to the staff of the establishments and friends to the customers. The swanky Bristol Hotel on Rue du Faubourg- Saint-Honoré has a pedigreed Birman called Fa-Raon (indeed they now have a second cat called Kléopatre). Happily I have been to one of the cat owning cafes, Le Rostand, opposite the Luxembourg Gardens, where I had a delicious onion soup, and have vague memories of glimpsing a cat moving amongst the chairs, who I now suspect was Roxane.

But it's more than just a cat book, Olivia talks about the history of the restaurants and institutions themselves, as well as of the surrounding area, and Paris itself. It's fascinating to learn that the carousel in the Luxembourg Gardens was designed by Charles Garnier, who more famously served as the architect for the Opera Garnier, one of my very favourite Paris buildings.

Parisian Cats was published simultaneously in English and French (as Chats Parisiens). The cats and their habitats are all beautifully photographed by Nadia Benchallal, who also usually documents more important issues than the comfort of cats.


I think it's just fantastic that cats are allowed, and actually encouraged in places where people shop, meet, mingle and eat. I don't remember seeing that many cats in Paris, although there was one in a bakery where we learnt how to make baguettes and croissants in 2010. You know I'll be keeping an eye out for some more Parisian cats very soon. Perhaps I'll get to meet Kitty when I finally walk in the doors of Shakespeare and Company?

Terrific post. I'm always on the lookout for cats. There's a cafe in Canada called the Cat Cafe that has six cats for people to come and interact with them. I'd love to visit a cat cafe.
Thanks for playing along with Dreaming of France.

Aw; that post definitely makes me smile. I have mixed feelings about cats in restaurants - the notion of cat hair in my soup is a bit off-putting but I do love seeing cats slinking past furniture, slipping quietly though open doorways in ways even the smallest dog could never manage. They truly are Aristocats.

When my mother went to Paris in the early 70s her descriptions of cats (and other animals) in cafes absolutely captured my cat-loving imagination, so I am sad that I've not seen a cat in a cafe in real life yet. I think I may need to do some research with this book now!

That's a book I think I must have for the Paris collection! Will you go to Les Chats Cafe when you are there? It wasn't open when I visited last -- and only two blocks from where I stayed! I could have most definitely used that spot when I was there, cat-sick!

I'd love to visit a cat cafe too Paulita.

I'm not bothered by cats in restaurants at all Sim, we have pets in our homes, and don't turn out food covered in hair, and it adds just so much to the atmosphere to see the lounging about.

I'm sure you'd love the book Vicki, and what lovely memories your mother must have.

Jeanie- It's a perfect book for you. I didn't know about the cat cafe! Thanks for mentioning it- I'll try to check it out. It wasn't included in the book, not sure if it was too recent, or they just wanted to include businesses that had single, pampered cats.

How wonderful to find another book about those French-speaking cats. You absolutely must go to Le Café des Chats (16, rue Michel le Comte, 75003) Order a tea or a chocolat chaud and just wait until a kitty comes and sits in your lap. You will love it!!

When do you leave again?

Did you get to visit the cat cafe in Paris-it was delightful.

Sadly I didn't get there this trip Esme, there is just always so much to do... But it always leaves things for next time.