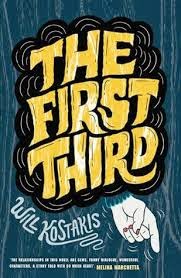 I picked up The First Third at my library recently when I saw it on the new books shelf. I'd first seen it on the CBCA shortlist for Book of the Year Older Readers 2014. Each year I'm hopeful for reading some of these books, and each year I get very few read. So I picked it up, and brought it home, thinking that I'd probably have to return it unread. And then I realised that I would be seeing Will Kostakis at the Sydney Writers Festival Secondary School Days (which I need to tell you about more fully, it was a great day). So I started, hoping to finish before the day. I got it half read before I saw him speak, and then finished it off after.

Life is made up of three parts: in the first third you're embarrassed by your family; in the second, you make a family of your own; and in the end, you just embarrass the family you've made.


The First Third is the story of a Greek family in Rockdale, in the southern suburbs of Sydney, and is firmly based around their matriarch - Billy's grandmother, Yiayia Filyo. Like any good Greek story there is food on page one. And the food references keep on coming- moussaka, haloumi even Vegemite. I was disappointed to see cilantro used though- we don't call it that here, well not yet anyway.

Yiayia is taken ill and gives Billy a list- her bucket list- which is small, but personal. She wants Billy to bring the family back together.

The severity of it all sank in. I had to repair my family or face losing it forever. It was my grandmother's dying wish.
Absolutely no pressure at all.


It's all set against Billy's HSC year, although school doesn't really interfere with the story all that much- after all "I went to school, and had to come home and study" isn't that exciting as a plot.

The First Third is Will Kostakis' second book, and he's still only 24! I really enjoyed it. It's fun, and funny, there's a few Facebook status updates scattered within the text, but not too many to be annoying.  I really got into the second part, and read it in no time. I know we'll all be reading more of Will in the future.

You really need to update us on your festival visit. We are waiting to hear about it.

Yes I need to do that. I hope I'll have a bit more time in the next week to get some posts organised.

This book has come up on a few of the other top Ten Tues lists this week for best books in 2014 so far....which made me think I should make this the one I should read from the shortlist.

Now I know it's set in Rockdale I will definitely have to give it a go (one of the booklets played soccer for Rockdale a few years ago!)