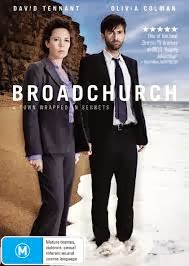 I don't get the chance to watch a lot of tv. I haven't seen a single episode of Downton Abbey or The Wire. I saw the first two or three episodes of Breaking Bad, but then missed some and never caught up. I think Broadchurch was on mid last year, when the family were lolling about in France, priorities you know. For some reason this show particularly appealed even though I didn't get to see any of it, or really know what it was about. I bought the DVD last year as soon as it was available.

This past weekend Mr Wicker and I caught up with it. I put the first episode in the player on a bit of a whim three days ago, when I was at a rare loose end. We watched the first two episodes that day. The following day we watched another two episodes. By this stage we were fully hooked. Today we watched the remaining four episodes in a bit of a Broadchurch marathon. Rather unprecedented activity in the Wicker household.

I didn't know too much about it when we started watching, and I'm certainly not going to spoil anything for you here. I knew it was a BBC murder mystery, and that the rather dishy David Tennant was a policeman investigating the murder. But that's about it. Sadly, David's character is somewhat troubled, and he doesn't look at his best here, but he does at least get to use his lovely Scottish accent, rather than the middle English voice needed for Dr Who.

The entire cast is particularly strong, with an impressive number of Dr Who alumni, including both lead actors. David Tennant of course. Olivia Colman appeared in the first episode with Matt Smith, The Eleventh Hour. Arthur Darvill (once Rory, and now local priest Paul Coates), and David Bradley who played William Hartnell in the wonderful An Adventure in Space and Time, as well as appearing in the Dr Who episode Dinosaurs on a Spaceship. It was nice to see Pauline Quirke again too after so long. Fascinating to learn that she got to act with her own dog.

While I had some rather minor misgivings about the production at times, it did an incredibly good job of making you suspect everyone in town, and keeping you guessing as to who really was to blame. I thoroughly enjoyed my 8 hours in Broadchurch and will look forward to season 2 that is being made this year.

Rather distressingly I see that the Americans are making an American version called Gracepoint. Now why do they have to do that when this is so brilliant? Although David Tennant reassures us that it will be different- he is again playing the lead investigator in this new version! I wonder if he'll get to use his Scottish accent for an American audience- I suspect not. And our Jacki Weaver will play the role that Pauline Quirke played in the BBC original. Will she have her Aussie accent? Again I suspect not.
Posted by Louise at 11:28

Must share this with Mr. Readerbuzz. He's crazy for mysteries.

Oh, we missed the last couple of episodes last year when we went overseas. I was enjoying it, but don't know what happened. DVD in order I think. Thanks for reminding me that I wanted to know!

Oh, we missed the last couple of episodes last year when we went overseas. I was enjoying it, but don't know what happened. DVD in order I think. Thanks for reminding me that I wanted to know!