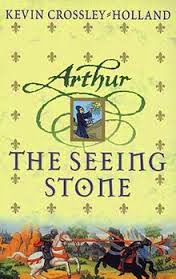 I was worried about this book. Arthurian legends aren't my thing. It's safe to say that the sum total of my experience and knowledge comes from multiple viewings of Monty Python's Holy Grail (did someone say word perfect?) and Master Wicker's prior, but relatively brief, obsession with the tv series Merlin. But when you embark upon a quest some of it will be into unknown territory. Arthur The Seeing Stone was unknown territory for me.

Arthurian legends arose in 14 or 15 medieval European languages, and one of these tales became one of the first books to be published in English- Sir Thomas Malory's Le Morte d'Arthur in 1485. There have been many books and films over the years, so it really should come as no surprise that these stories have an enduring popularity even now.

Arthur The Seeing Stone is the first book in what was to become a trilogy. Here we meet 13 year old Arthur de Caldicot, a second son growing up in the Welsh Marches in 1199. It is a time of political and religious turmoil, a time of crusades, Richard the Lionheart will die this year

Arthur's father, Sir John is the local knight living in relative comfort (for the Middle Ages) in a small village of 60 people. Kevin Crossley-Holland does create a remarkable feeling for the period, the inequities of feudal system, the constant hunger, the primitive medicine, housing and marginal existence faced by most of the people.


It had to come
Help, help I'm being repressed!

Arthur is keen to start his adult life- to become a squire and then a knight, but as second son he struggles with the fear that he may be forced to become a priest or a scribe. Arthur excels with archery but he struggles with some of his yard exercises- jousting and tilting- which somehow seem to be different. Merlin gives Arthur a special obsidian seeing stone that shows him extraordinary scenes of dragons, battles, a young boy and a mysterious hooded man. The stories in the stone sometimes reflect Arthur's life, and at other times show a point of difference.

'But who are you?' asked Merlin. 'And who are you to be? That's what matters.'


Written in 100 short short chapters, I did struggle with Arthur for much of the book, although it built in momentum for me, and I did come to enjoy the last third more than that which had come before. Usually I like books written in short chapters as it's an easy way to make quick reading progress. Here I found the chapters more like snapshots, and a bit disjointed. Clearly I must be missing something as Kevin Crossley-Holland won the Guardian Children's Fiction Prize for Arthur, and it also won the English language award for the Welsh book prize Tir na n-Og, and was shortlisted for several other prizes.


'And I said that anyone without a quest is lost to himself.'


Thank goodness I've already got one.

Glad you made your way to the end of it. I liked it very much and I'd love to read on but, as you say, we must continue on our quest.