Browsing through my library catalogue checking out books for Paris in July I came across Daily Life in Ancient and Modern Paris and knew that I would have to read it. And an interesting read it is too.

It must be said that I don't know a lot about French history. I remember studying the French Revolution in high school Modern History. But that was in the 70s, and what can I really remember? Not that much. Names mainly, and the general gist of the thing. I'd never been taught about older French history, nor given it a thought I suppose.

So it was very interesting to learn of early Paris. Celtic ironage people settled into the limestone hills near the Seine in the seventh century BC. A village was created on the Ile de la Cite about 300 years BC. It was the time of the Parisii, "boat people", who fished and traded on the Seine. 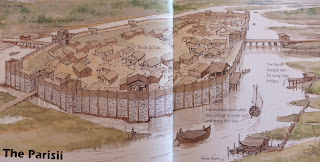 Paris was invaded by the Romans before the birth of Christ, and the Romans built a settlement on Ile de la Cite, which they called Lutetia Parisiorum. Lutetia grew over the next few hundred years to spread to both sides of the river.

The Vikings began invading in the 9th century AD, sailing their boats down the Seine to attack Paris six times in 10 years. They laid seige in 885. Complicated political machinations (that I don't fully understand) led to Ile de France breaking away from what was then the Frankish Empire to form France. 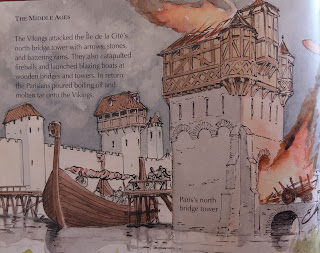 Despite centuries of war and religious fighting Paris blossomed. Notre Dame was constructed between 1163 and 1345. Plague arrived a few years later in 1348 near the start of the Hundred Years War. Tumultuous times continued in the 17th and 18th centuries with increasing disparity between rich and poor culminating in the French Revolution of 1789.

Interesting to note that it was the Revolution that created the opportunity for Paris to become a culinary leader of the world. The Parisian chefs had traditionally prepared their meals for the nobility, they found themselves without employment after the aristocracy had largely been guillotined and so they opened restaurants for the public.

The beauty of central Paris that I love so much was created when Georges-Eugene Haussmann was given the job of rebuilding the city in 1850 by Napoleon III (Napoleon's nephew Louis-Napoleon Bonaparte). More than 20,000 buildings were torn down, and 40,000 new buildings constructed in Second Empire style- 5 or 6 story apartment buildings with wide facades, mansard roofs, wrought iron balconies and tall windows- that is all so familiar, and delightful. 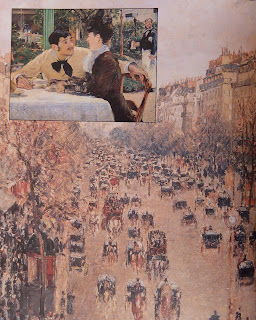 Paris was again under seige in 1870 during the Franco-Prussian War. Hot air balloons were used to communicate with the outside world during this time, and famously many of the animals in the Paris Zoo were killed for food. 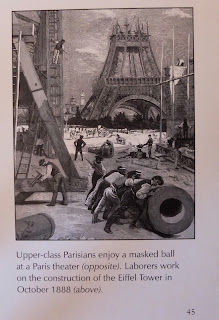 Paris was occupied by Nazi forces from June 1940 to August 1944. The Resistance leader was General Charles de Gaulle. I probably should have known that. At least I do now.


I was surprised to learn that the population of Paris in 2001 was only 2.2 million people. Although it appears that this "Paris" would be the 20 central arrondissements inside the periphery. The population of central Paris peaked in 1920 at 2.9 million. The population of the broader Paris metropolitan area is around 12 million currently.

Daily Life in Ancient and Modern Paris is part of a series published by Runestone Press. Other cities include London, Timbuktu, Istanbul and Cairo.