The Family Under The Bridge 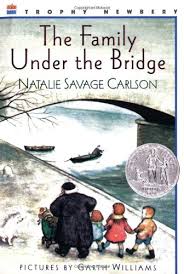 The Family Under the Bridge has been in my Paris TBR for some time. I came across author Natalie Savage Carlson a few years ago when I found an old copy of Pigeon of Paris at a used book sale (see my review). So I ordered a copy of The Family Under the Bridge, which appears to be her most famous book, and was a Newbery Honor Book in 1959. I think it was when I was moving books around selecting my stack for the recent Dewey's Readathon that I saw it on my shelves again and knew the time had come to read it.

I suspect that if I knew it was quite a Christmas story then I might have left it to later in the year, but I'm sure I would have forgotten about it again by then anyway. It's a quick little read too, only 123 pages. Armand is homeless, or "an old hobo" in 1950s parlance. It is a cold December day when he gathers his possessions and moves back to his usual winter home under a particular Paris bridge.

Down the quay he pushed the buggy toward the bridge tunnel that ran along the shore. On the cobbled quay a man was washing his car with the free Seine water. A woman in a fur coat was airing her French poodle. A long barge, sleek as a black seal, slid through the river. It was like coming home after a long absence, thought Armand. And anything exciting could happen under a Paris bridge.

But Armand finds three redheaded children living under his bridge. They too have become homeless after their father died, and their mother couldn't afford their rent on her wages from her job at a laundry.

It is a rather simple and wholesome story, with some gypsy characters who are friends of Armand.

"To think we have fallen so low," wept the woman. "My children at home with gypsies."
"What is wrong with gypsies?" asked Armand. "Why do you think you are better? Are you kinder? Are you more generous?"
"I'm honest," murmured the woman through her scarf.

I can't imagine that this book would come anywhere near Newbery Honor status these days. It feels somewhat saccharine sweet. I suspect that I wouldn't have found it appealing at all if it hadn't been set in Paris.

Naturally, I did enjoy glimpses and insights into 1950s Paris. I was confused at mention of "the Louvre store", but did some searching and realised that it was referring to Les Grands Magasins du Louvre a department store that operated until 1974, and is now Le Louvre des Antiquaires. Les Grands Magazines had impressive doors. 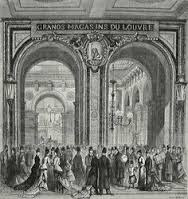 "In the good old days of Paris," he told the children, "they used to ring bells in the market places at the close of the day so the tramps would know they were welcome to gather up the leftovers. But no more."

Labels: Books You've Never Heard Of But Just Have to Read, Dreaming of France, Newbery, Paris

Louise, I think the scenes that you described juxtapose the rich and the poor in an honest and jarring way. And the fact that the hobo is defending the gypsies shows a kind of open-mindedness that I wouldn't have expected of the 1950s. Sounds like there's still a lesson to be learned here. Maybe in the U.S., because of the open racism that has arisen, we're more likely to notice it.
Thanks so much for playing along with Dreaming of France. And next time, try some butter on the bread before you add the cheese!
Here’s my Dreaming of France meme