How Proust Can Change Your Life 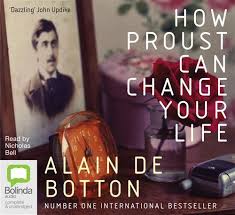 I do enjoy Alain de Botton's work whenever I get the time to appreciate it. I very much enjoyed The Art of Travel a few years ago. I was sold on How Proust Can Change Your Life from the time I first saw the front cover, and given that it was first published in 1997 that was some time ago. I bought the book a few years ago but it has sat on my shelf patiently waiting its turn although occasionally I would glimpse that lovely cover and hope to read it sooner.

Happily a couple of recent(ish) events conspired to get me there. My friend Lisa at ANZLitlovers read it in March last year, and I read her review eagerly. And then it came time for Paris in July 2016 and it seemed the perfect time to pop the audiobook in the car CD player. Sadly I've long ago run out of July, and 2016, for the review. Indeed it's nearly time for Paris in July again. Ah, c'est la vie.

How Proust Can Change Your Life is told in a series of nine lessons.

On one level it is a biography of Proust in some detail- his habits, his prodigious tipping, the precarious state of his health. I don't think I ever knew that Proust was self-published!

I haven't read Proust. Well, I did try to once but didn't get beyond the initial 30 pages of the narrator falling asleep, but I have an increasing fascination with him and his work. I want to give it a red hot try at some stage, but until now I'll read about him, and think about him. I've stalked him in his room.

I couldn't help but wonder what the modern diagnoses for poor old Marcel may have been. He had such problems with his skin, his digestion, his asthma.


Proust frequently has to suffer distressing insinuations that he is not as sick as he suggests. At the outbreak of the First World War the medical army board call him up for an examination. Though the man has been lying in bed more or less continuously since 1903, he is terrified that the severity of his illness will not be appropriately considered, and that he will be made to fight in the trenches.


Alain and Marcel also had some helpful suggestions for Reconsidering My Life. Alain de Botton suggests that n'allez pas trop vite could well be a Proustian slogan. Don't go too fast. Wise words I'm sure, but is that even possible in the modern world of a single working mother?

Proust famously did not realise the nature of what he was trying to write until he had begun to write it. When the first volume of The Search of Lost Time was published in 1913, there was no thought of the work assuming the gargantuan proportions that it eventually did; Proust projected that it would be a trilogy [Swann's Way, The Guermantes Way, Time Regained], and even hoped the last two parts would fit in a single volume.


However, the First World War radically altered the plans by delaying the publication of the succeeding volume by four years, during which time Proust discovered a host of new things he wanted to say, and realised that he would require a further four volumes to say it. The original five hundred thousand words expanded to more than a million and a quarter.


None of which is surprising in the least when you see the pictures that Alain has included of the rewritten manuscripts and the revisions and comments that Marcel poured onto every square millimetre available of the publishers proofs.

Chapter 7 How to Open Your Eyes, was my favourite chapter, about what would now be labelled gratitude, and of seeing the beauty in the quotidian.  Proust recommended studying the works of Jean-Baptiste Chardin in order to see the beauty in everyday objects. "Chardin's paintings succeeded in being extraordinarily beguiling and evocative."

"A peach by him was as pink and chubby as a cherub, a plate of oysters or a slice of lemon were tempting symbols of gluttony and sensuality." And I'm at least moderately certain that I would have walked past them in the Louvre- another reason to go back to Paris...

Why don't we appreciate things more widely? The problem goes beyond inattention or laziness. It may also stem from insufficient exposure to images of beauty, which are close enough to our own world in order to guide and inspire us.

While I do seem to prefer non-fiction audio books to fiction, the audio format does leave the listener without illustrations, or the rather intriguing layout of the book form of How Proust Can Change Your Life. A layout that I really wasn't expecting from de Botton.

Proust spent lots of time at the Ritz entertaining, and was a legendary tipper


Though he was well catered for at home, and had a maid adept at preparing wholesome meals, and a dining room in which to give dinner parties, Proust repeatedly ate out and entertained at the Ritz in the Place Vendôme, where he would order sumptuous meals for friends, add a two hundred percent service charge to the bill and drink champagne from fluted glasses.

I can't express my relief that I've finally finished this post. I finished listening to the audiobook last August I think. This post has been an albatross around my neck. Now lifted. I can move on.

One of my colleagues (who is a similar age to me) is in the middle of Vol 1 of Proust. And he does feel like it's changing his life.

Like you (& me) he tried Proust in his early twenties and it didn't take. He feels it works better as a more mature read. I like the idea of reading de Botton first though.

Louise, Your closing made me laugh. Isn't it funny how we decide something has to be completed and we can't slough it off? I definitely learned several things about Proust through your review. I would never have pegged Proust for a gratitude kind of guy. Maybe I do need to read more about him.
Here’s my Dreaming of France meme

That's interesting Brona, I do suspect it takes a bit more of a mature outlook and possibly mature level of patience. I will try it again some time. Not sure when though.I've still got more books to read about reading Proust, and a graphic novel. I wonder if there's an audiobook? That might work for me.

It is funny Paulita. I committed to doing a review last year. I've had it on my review coming soon(ish) for the better part of a year. Other people may not notice such things, but I'd put it there and it was important for me. I really wanted to finish the post because of the topic of Proust, and so it will always be there as an aide memoire for me too.

Interestingly I've this book on my bookshelf and have yet to read it - after your post I think that the time has come! Bon week-end, Elizabeth