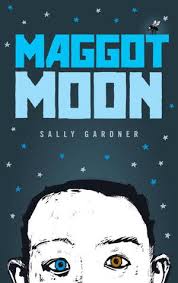 I picked up the audiobook of Maggot Moon from my library recently. I was looking for an audiobook for a road trip that Master Wicker wouldn't hate. I'd never heard of Maggot Moon particularly, although I've had a growing awareness of Sally Gardner for some time, never really hearing about her properly, but aware of her oeuvre, that it's very well regarded and that she covers a rather vast subject range.

So I didn't know what was coming when I popped the first disc of Maggot Moon into my car CD player. Oh. My God. It's so good. It's extraordinary actually. The young narrator Robert Madge did a particularly amazing job. He absolutely inhabits Standish Treadwell.


Before Hector came to this school, I hated it. I believed it was invented just so the bullies, with brains the size of dried-up dog turds, could beat the shit out of kids like me. A kid with different-coloured eyes: one blue eye, one brown, and the dubious honour of being the only boy in the whole of his class of fifteen-year-old who couldn't spell, couldn't write.


It is 1956 and Standish Treadwell is 15, born into an impoverished and repressed neighbourhood in Sector 7 of the Motherland. Standish lives with his grandfather as his parents have left a few years before. People disappear frequently in Sector 7 and all evidence of their life disappears along with them. Standish and his grandfather have a marginal existence with little food, and many rats in the cellar.


I tell you this for a bagful of humbugs, it was eerily deserted under this houses. All we could hear down there was the conversation of rats. A very stubborn thing is your common brown rat. I often wondered how it was the rats became fat when we were so very lean.


The Motherland is a brutal regime and is out to impress the Evil Empires of the world by sending a manned rocket to the moon. It's hard to say much more about the story without spoilers. While I'm not a fan of allegory on the whole, and although Maggot Moon is clearly allegorical it's brilliance is such that I plainly saw that and just didn't care.

Maggot Moon is not a gentle story by any means, it is actually quite violent, quite shockingly violent. But it is unbelievably gripping. I paid attention intently. And then I listened to it again. And again. Even now after I've finished listening to the book five or six times, I can't get it out of my head.

So much so that I googled about it quite a bit.

Sally Gardner is dyslexic and she didn't read til she was 14 because of it. D'oh of course Standish is dyslexic. Rather embarrassingly I didn't form that word in my mind while listening to Maggot Moon, I just accepted Standish and didn't label him. But it's pretty obvious now. Sally Gardner has become a dyslexia campaigner and spokesperson. Jackie French is one of my favourite writers, and is also dyslexic. I'm not sure whether that has any significance or not.

I also borrowed the physical book from my library because I was intrigued as to how it would look. It's fabulous. Illustrated with rats and maggots that make a great animation as you flip through (in parts).  Told in 100 short chapters it would be a lightning fast read. I think I'll read the book sometime. Maybe in a few months.

I will be reading Sally Gardner's work again sometime very soon. I'm totally intrigued. What a talent she has. What an imagination.
Posted by Louise at 08:59