Molly and Pim and the Millions of Stars 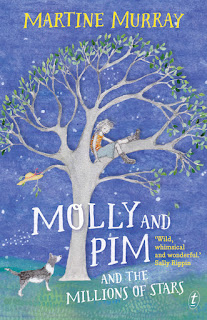 I fell in love with Martine Murray back in 2011 when I read her two absolutely gorgeous books about Cedar B. Hartley. The Slightly True Story of Cedar B. Hartley (see my review) and The Slightly Bruised Glory of Cedar B. Hartley (see my review). Both quirky, delicious, delightful reads. I fully intended reading more of Martine Murray and think that I've borrowed another book from the library a couple of times, but never got to reading it. And then this week I heard that she had just released a new book- I was at the book shop rather quickly. And it had to be read immediately.

Molly and Pim and the Millions of Stars is yet another quirky, delightful read. Molly lives with her mother in rather unusual circumstances. Molly's mother is a hippy at the very least, a healer, vegetarian, loving, possibly bordering on a witch like creature going out to collect wild herbs at dawn when the vibrations are best to make her potions. Molly and her mother live in an unusual house.

Molly's house might have looked like a normal house from the outside, but on the inside it was quite different. As soon as you walked in, instead of a pleasantly regular feeling, there was an airy, open space with not one proper corner or straight line. Scatterings of large brightly patterned cushions, Persian carpets, billowy curtains, and low-lying beds covered in sequinned rugs made the room feel like a gypsy caravan.


Of course Molly is a bit embarrassed by her mother's herb collecting and other slightly eccentric activities and she longs to have a normal childhood existence, like her best friend Ellen who lives in a normal house with her family and goes to pony club on Saturday mornings.

Molly blocked her ears with her hands and imagined that her mama was just like Ellen's mother who drove a nice clean car and gave Ellen muesli bars in plastic wrappers and let her watch whatever she liked on television.


Molly's mother is wise, but one average Saturday she makes a terrible mistake and Molly is left alone to look after herself. She must try to keep out of the way of the interfering, meddlesome neighbours, the Grimshaw's.

The neighbours were staunch, zipped-up, sneering people, who glanced away when you went near them, but were always peering over fences and squinting into everyone else's lives.


Molly turns to Pim a rather odd boy in her class for help to solve her problem. Molly and Pim and the Millions of Stars is eccentric and a bit hippy too, illustrated with Molly's drawings of herbs. It is however an enchanting, beguiling and whimsical story that is certain to delight young readers.

This video says that it is 10 years since Martine Murray's last book! Martine worries that modern kids aren't imaginatively engaging with nature, and Molly and Pim and the Millions of Stars is a response to that, and encouragement to kids to get out there amongst life and nature.  I hope Martine Murray's new generation of readers will look back to her other reads, there is much delight in store.