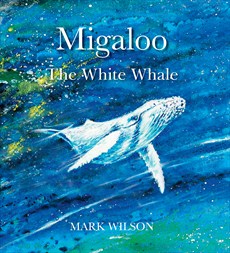 I do love a Mark Wilson book. His themes, most often of war or our natural world and the environment are important, and his illustrations wonderful. So when I saw Migaloo on the shelf at my bookshop this week I was compelled to buy it then and there.

Migaloo is a fictionalised account of a real whale. Although I've only really heard of Migaloo in the last few years, I now know that he was first seen way back in 1991. The book tells of Migaloo and his mother migrating down the coast of Eastern Australia. Whale watching is now a very popular winter pasttime along our coast. We went whale watching off Newcastle twice in 2012. The first time we didn't see any whales! We went back a few days later and were much luckier. Seeing whales in the ocean, even non-white ones, is such a thrill. 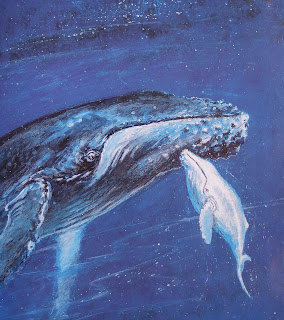 Migaloo himself is somewhat of a local celebrity in Australia. He even has his own twitter feed and Facebook page and website where his movements are tracked. A few years ago a new white calf appeared off Queensland, but it is not known if this new calf was fathered by Migaloo or not.

In the book Migaloo and his mother swim south to the Antarctic waters where they will spend the summer and feed, an extraordinary journey of 12,000 km! They encounter dangers on the way- people and sharks, and also learn of whale song.


Hachette Australia have kindly provided a great Teacher's Guide for Migaloo, which includes a really fascinating section on the illustrative techniques that Mark Wilson used to create the images in the book. Artists are so clever, I would never have thought of dipping a pencil in paint and drawing the paint on, but it makes sense when you think about it. Mark Wilson also shares his strong environmental concerns- the many species under threat in our oceans, and that we need to come together to preserve them. Essential messages for both adults and children alike.