Kizmet And The Case Of The Tassie Tiger 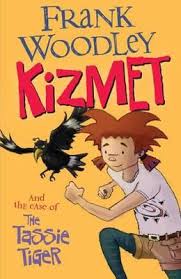 Comedians are the new children's authors it seems. And why not? Kids certainly love humour, and they love humorous books. Just look at the phenomenon that is Andy Griffiths. And David Walliams has really hit the big time writing children's books. I saw recently that Julian Clary has released his first children's book! The Bolds. You know that I bought it immediately don't you? I also have Russell Brand's The Pied Piper of Hamelin sitting amongst my TBR. And you know that if Keith Richards can write a kids book, then I guess anyone can.

Recently Australian comedian Frank Woodley released his first two children's books simultaneously. Which seems a slightly odd move perhaps. Both books feature a young girl, Kizmet Papanicillo, her father Detective Spencer Papanicillo, and Kizmet's personal assistant, Gretchen- who just happens to be a currawong. And when comedians get involved naturally the story is narrated by the currawong.


Kizmet's father works for IMPACT- International Mysteries, Puzzles and Crimes Taskforce. He takes Kizmet along on his cases- which is a good thing because of course Kizmet is the brains behind the operation. Here the trio are called down to Tasmania to investigate sightings of a large Tasmanian Tiger. Rather impossible as Tasmanian Tigers have been extinct since the last one died in captivity in Hobart in 1936. But goats have been attacked and there have been fearsome noises in the night. It all needs sorting out. 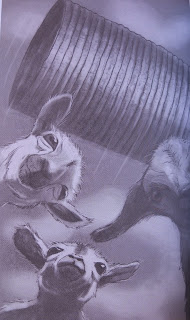 Kizmet and the Case of The Tassie Tiger is much more adventure/mystery story than I expected it would be. But there are plenty of laughs along the way. It's great fun for young readers.

As I was reading I was admiring the fantastic illustrations, and flicked back to check who the illustrator was. Odd to not have one acknowledged on the front cover... Were they done by Frank Woodley? Yes it seems so!  Mr Woodley has some little known talents. In this Melbourne radio interview Frank tells that he initially wanted to be an artist as a young man. He could well have done so it seems. I look forward to reading his other book Kizmet And The Case Of The Smashed Violin.