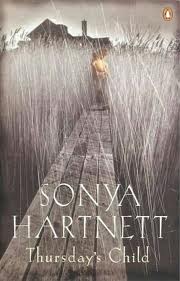 For some reason I was vaguely apprehensive approaching Thursday's Child. I'm not sure why. I know and respect Sonya Hartnett, and I've even seen a stage production of Thursday's Child a few years ago- it was an extraordinary piece of theatre, very moving. Perhaps it was the cover, which I don't think I like? I don't know.

Any concerns I had were swept away in the first few pages as I was immersed in the world of the Flute family, primarily through the eyes of Harper Flute, who is 4 when we meet her. Her family eek out a marginal existence in rural Western Australia in the 1920s. Harper's father is a returned soldier and now supporting the family by trapping rabbits and selling the pelts. Da has been injured physically and mentally by the war, and now he drinks a bit more than he should, and we see the start of the Depression unfold through Harper's eyes. We see the day to day struggle to survive through very realistic words.


This time, however, she hauled me to my feet and, with her free hand, slammed Da over the head. 'Don't you take your miseries out on a child,' she snarled. 'You're a coward,  you are, taking on like an infant. Do you think you're the only one living this life? You aren't. The children and I didn't ask for this. Get to your feet, you disgust me.'


We also see the subterranean world of Tin, Harper's younger brother, and the Thursday's Child of the title (Thursday's child has far to go), who takes to digging tunnels under the family house (always described as a shanty), spending more and more of his life underground. An impossible, improbable story that would be ridiculous in the hands of a lesser writer,  but Sonya Hartnett draws us effortlessly into the rather bizarre home life of the Flute family. Each time I picked up this book I found it compelling all over again, and was immediately drawn back into the Flute world.
Yet Tin's story isn't real. It can't be real, can it? But in Hartnett's hands I can easily suspend disbelief and not be worried by that too much. I generally don't like stories with magic realism elements, and I'm not sure it's that either. Thursday's Child somehow defies classification for me. I've read a few Sonya Hartnett books before, she has written for children and adults, and they often don't seem to be easily classified reads- it's almost like she creates her own genre, and that changes slightly with each new book. It's not all grim and depressing though, there are moments of great humour.


I talked to him to keep him distracted, ....... and what would the baby be, a new boy or a new girl? We had two of each already, not counting Mam and Da, so things were pretty equal as they stood and it would be a hard blow to the side that came away the minority. I thought it was a shame that only babies could be born,whichever it turned out being. I could think of plenty of other things I would have preferred to get for nothing.

Thursday's Child is such a powerful, moving story. Beautiful writing stopped me in my tracks on many, many pages.

My heart is calm now, although it is an uneasy, fitful calm, like the sleep of an ailing person.


I should start a list of books that I mean to reread, and I should put Thursday's Child on that list.
Posted by Louise at 23:12

I read this years ago but I must confess I don't remember much. Time for a reread for me I think!

I like your comment about writing her own genre. In some ways her style reminds me a little of Kate DiCamillo's.

It's truly extraordinary how she can pack so much in to such slim books. Her mastery of nuance and layering is breath-taking.

It would certainly reward a reread I think Marg.

I totally agree Brona- she's amazing, which makes me sad that I haven't read more of her writing.