This week I spent a few days in Rotorua, New Zealand. I was at a conference and my sightseeing time was limited, but was able to walk around town one afternoon. Kuirau Park is on the edge of town and offers a fascinating glimpse of the areas geothermal activity, especially if you're not able to get to one of the major tourist areas out of town. It's a council park, so it's free.

My first glimpse was of gorgeous NZ green.

Soon you realise that there's lots of fenced off areas. 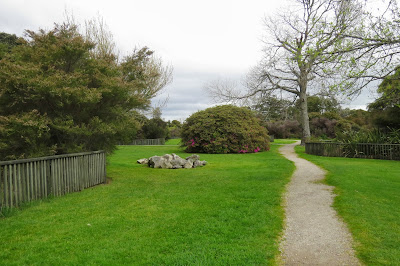 The larger ones have gates and you can walk around inside 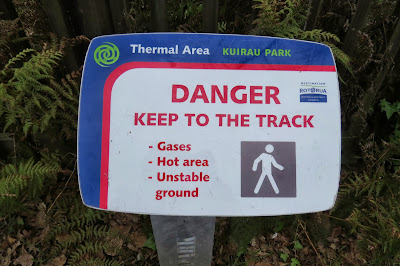 Some of the smaller areas you just peer over the fence. Each one was slightly different. It makes you look at the world differently. We tend to look out at our landscape and see stability, rocks, a view that doesn't really change from one day to the next, from one decade to the next. But Rotorua gives you a glimpse of the instability that lies just below the surface. I saw a sign that said Rotorua has an earthquake a day (but Richter 2 and so not felt by us). My taxi driver snorted at that, and said they had more like 30 a day. He was happy about that as the pressure is being released.

There's a large lake in the middle of the park. That bridge was minutes away from all the wisteria opening when I saw it. A few of the flowers were out on the other side. The tulips were out all around the lake and very pretty, but there was a busload of Chinese tourists in front of, or in, every stand of tulips. 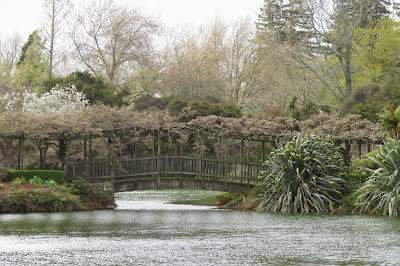 There are a couple of warm foot baths in the park too, so you can soak your feet for a while in the warm waters.

The largest geothermal area is up near the corner of Lake Road and Ranolf Street. It's extraordinary.


Rotorua was an amazing place to visit. There are heaps of activities I would have liked to have tried. I'll have to put it on the list to go back sometime.

the photographs are stunning and you're right ~ what a contrast from the green grass to the desolation of the bubbling mud! What an experience that must have been to walk along the paths ~ thank you for sharing!

Gorgeous shots...I love the steamy ones, and the twisted lichen. That bridge with the mist around it (or steam?) would make a great book cover for a scary read.

what a great adventure, I'd have liked to soak my feet in the warm baths. Amazing, I had no idea such places existed.

Amazing photos. I particularly like the 'steamy' ones, and yes, they do look eerie. A wonderful photographer you are. Thanks for sharing these unique views.

Amazing doesn't even begin to describe what seeing this in person must be like. I knew NZ was volcanic but had no idea the instability was bubbling up in town.

You win best shots of the week! Gorgeous!

Leslie, NZ is on an active fault line, and they do get quite a few earthquakes (most famously the terrible Christchurch earthquake a couple of years ago), but Rotorua is famous for it's geothermal nature- most of NZ isn't like this.

What an interesting place! Thanks for sharing the pictures!

Rotorua truly is a strange but gorgeous place! I haven't been to this particular park but I will put it on the list! Your photos are just lovely.

Gorgeous shots! That's a place I would love to visit. How nice that it is free. Thanks for sharing the lovely and varied sites.