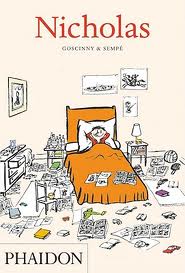 I was predisposed to like Nicholas. I have a rather un-secret obsession with Paris, and most things French, and this French classic fits the bill perfectly. So I purposely timed the reading of it with my recent Paris holiday. I had planned to finish it before I went, but didn't of course, so it was tucked into my suitcase.

Originally published in French as Le Petit Nicolas, there are a series of five Nicholas books published in English by Phaidon. They are enduring classics in France and Germany, and published in 26 languages around the world.


Rene Goscinny was also the author of the even more popular Asterix books, and has been honoured by having a street named after him in Paris, Rue Rene Goscinny, to which I made an early morning pilgrimage one day in July, but you will have to wait a little longer to see the photos- it was surprisingly fun.

Nicholas is a collection of 19 stand-alone short stories about the adventures of a young boy, and his group of friends. Alec the fat friend is always eating. Cuthbert wears glasses "so we can't thump him as much as we'd like to". Geoffrey has a rich father who buys him all the toys he could want.

Each story is a simple tale- mucking up the school photo, taking a lost dog home, playing a game of football, trying to smoke a cigar- mild calamity always ensues of course. I found Nicholas's first person narration a bit too disingenuous for my taste.

It was my mum's birthday and I decided to buy her a present like every year since last year (before that I was too little).


I never really took to Nicholas. I was saddened that I didn't immediately love him, but am glad to have joined the millions of readers of these classic stories.

I don't know these books, but the illustrations and ideas you share are absolutely charming! I'll have to hunt them down!

I saw your earlier posts on Meeting the French. I wonder if they do that for French people too – as I am French but for example, I have never visited the back of a boulangerie or watched how chocolates were made. As for Le Petit Nicholas – I have not read them but I did buy one book for my grandson. When I was little I was addicted to the books of “Bécassine.” I still have some and now they are collector’s items.

Louise, I hadn't heard of these books. Maybe they appeal to children more, but like you, I love everything about France. Here’s my Dreaming of France meme

Nice to know about these books.

I think this would be a nice read to start learning about life in France from a little boy's perspective. I wish I can get second hand books in English.

Visiting you from the Dreaming of France meme. My post is up at:

Le Petit Nicolas is very popular in France, I read it there when I was in 6th grade. plain funny