The Secret of Hanging Rock 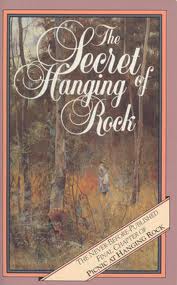 Having recently read the wonderful Australian classic Picnic at Hanging Rock it was of course immediately necessary for me to search out the final chapter, Chapter 18, published here as The Secret of Hanging Rock.

There is a rather fascinating introduction by John Taylor, who at one time was Promotions Manager at Lady Lindsay's publishers, and was later to become her literary agent. Joan Lindsay gave the manuscript for Chapter 18 to him in December 1972 because she said he was the only one who ever worked out the secret. He'd noticed that there were some phrases in Chapter 3 that didn't seem to fit in with the story. He felt that references to "drifts of rosy smoke" and "the beating of far off drums" seemed to anticipate later events that didn't eventuate.

It turns out that with the pruning of Chapter 18, some snippets of it were inserted into Chapter 3, and this is what John Taylor had noticed. Apparently Joan Lindsay "kept silent on the subject of the final chapter for the sake of her publishers and the film-makers". But she did want it to be published after her death.I do think the publishers were right in editing it out from the book, Chapter 18 is quite mystical where the rest of the book isn't particularly, it would sit oddly as the ending. John Taylor points out that this made Picnic at Hanging Rock a mystery which was never meant to be a mystery (although Chapter 18 is mysterious). Joan Lindsay had an effect on time, she was unable to wear watches as they would stop on her, and on people around her. Is this why she chose to stop time in her final chapter?

Yvonne Rousseau sums up a rather academic commentary on Chapter 18:


Whatever Chapter Eighteen was like, its publication could never have reduced their haunting quality (the film and the published novel). As it is, the chapter adds to the Hanging Rock mystique. Joan Lindsay's original intention is finally disclosed- but her intention was not to dissolve the mystery. The Picnic geography is clarified, but the eeriness remains.

John Taylor made a rather fascinating observation of the publishing industry:


Being a professional publishing person, I naturally hadn't actually read the book. People in publishing early have time to read anything- a fact that accounts for much of the tension which arises between them and authors. Publishers refer to books as "titles" and collectively as "lists". Lists of titles are what publishing is about. Actual pages of print are too time-consuming.


I hope that isn't still the case!Rather incredibly, the original manuscript of Picnic at Hanging Rock was pulped! He tells us that Joan Lindsay was in the habit of writing longhand, and she would then type drafts from her original. He describes Joan Lindsay's initial meeting with Pat Lovell and Peter Weir who were to make the highly successful film version of Picnic at Hanging Rock, that I'm looking forward to revisiting soon.

I also did some research about Joan Lindsay after finishing Picnic at Hanging Rock- she was a fascinating woman and very well connected from a young age, daughter of a barrister, she was an artist, formally trained including under Frederick McCubbin. She was to marry Norman Lindsay's brother Daryl Lindsay, a fellow artist who was to later become the Director of the National Gallery of Victoria. I do wonder if her artistic training helped her descriptive passages to be so lush and wonderful? Significantly, St Valentine's Day, the day of the fateful picnic, was her wedding anniversary.
Posted by Louise at 11:15

Ah, fascinating! It does sounds pretty odd - I suspect I'll have to re-read the whole book now.

You should not believe that this so-called 'missing 18th chapter' was written by Joan Lindsay herself, because it probably is not. There is no material evidence whatsoever for this idea: no manuscript, no typoscript, no annotations, no notary document transferring the rights to her publisher, no 'last will' in which Lindsay says she wants the chapter published after her death.

All we have is hearsay, and more hearsay, by her editor/publisher, who made quite some money off the published "18th chapter" and the renewed interest in 'Picnic'.

My best guess is that this is a total sham. Lindsay was a fierce and vocal advocate of her novel as being conceived of and written as open-ended. She loathed the idea of there being some practical who-dunnit solution to the book. And seriously, the solution totally undermines the literary and philosophical qualities of this great novel.

So please take the 'missing 18th chapter' for what it most probably is - a sham.