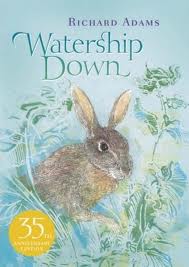 Somehow I didn't read this book in the 70s. I don't know how. It was certainly famous enough. I can't even think about the book, without the song flooding my consciousness. Perhaps a book about bunnies wasn't appealing enough to my teenage self?

So I was intrigued to start reading it recently. And feeling some pressure to love it I must say. Of my 12 friends on goodreads who have read Watership Down, 9 gave it 5 stars, the other three gave it 4 stars. It seems it is  a well loved book.

I was surprised to see it start with a rather bloody quote from Aeschylus' Agamemnon. Each chapter starts with a rather suprising quote actually- Greek plays, classic poems, Napoleon quoted in French. Shakespeare. Cosi fan Tutte in Italian. No dumbing it down for the kids there.

Most chapters are a mere few pages, making it easy to sneak in an extra chapter whenever you have a free couple of minutes during the day. A great way to make quick progress on what is a rather thick book. Watership Down was originally created as stories for Richard Adams' young daughters to pass the time during long car trips. The family were driving to Stratford-upon-Avon to see Judi Dench in Twelfth Night, when his daughters clamored for a new story, and their father began telling them a story about two rabbit brothers, Hazel and Fiver.

The book starts with immediate action, young Fiver senses a distressing premonition of danger for the warren.

But it's not exactly danger that I seem to feel about the place. It's- oh, I don't know- something oppressive, like thunder: I can't tell you what but it worries me.


Fiver's sense of impending doom drives an all male band of rabbits from their home at Sandleford Warren. They risk life and limb in their search for a suitable place to establish a new warren, and then attract some does to join them. I did wonder if the two other warrens that our band come into contact with, the odd group at Cowslip's warren who appear to have sold out, and the rather regimented life at Efrafra under the tyrannical General Woundwort were allergorical for a larger socio-political view. It was the early 70s after all. But no. Richard Adams denies that outright. He was just telling a story. With goodies and baddies, who just happened to be rabbits.

I enjoyed my time with Hazel and Bigwig and Fiver. I learnt quite a bit about rabbits along the way. Much of it makes sense if you think about it. They spend half their life underground. In burrows generally dug by does. Rather astonishingly in an overcrowded warren expectant mothers may actually resorb their litter if they are too stressed.

It's changed my life to learn that rabbits pass two kinds of poo. There were multiple references to particular rabbits eating pellets, which I passed over initially, but then wondered how wild rabbits could actually be eating pellets. Turns out it wasn't the pellets I was thinking of at all. Not manufactured food pellets, after all, that can't be. Rabbits pass two kinds of poo! Which makes no sense at all, but it's true. The hard droppings that we're probably all familiar with and soft viscous pellets that they reingest almost immediately, and I've never seen or heard of before. Happily for the rabbits they swallow these pellets without chewing.

It's hard to imagine how one tube of gut can produce two different sorts of poo. Like much of life it seems it's all in the timing. Food that enters the caecum (the first part of the large bowel) in the morning, undergoes little further processing and is then covered by a special mucus. These are called soft or night pellets, or caecotrophes if you want to be fancy. Food that enters the caecum at other times of day is processed differently- most of the water is extracted and the typical hard rabbit poos form. From the diagrams I found it seems that rabbit caecums are more of a sidestreet than it is in a human intestine. A fact of anatomy for which I for one shall remain eternally grateful.

I really enjoyed this glimpse of the bucolic English countryside- so many plants, which of course would be vitally important to rabbits, and they would know all the names (if they spoke I guess). They have such wonderful names in English. Figwort. Fleabane. Pimpernel. Speedwell. Heartsease. Persicary.

Read as part of my ongoing quest to read 1001 Childrens Books You Must Read Before You Grow Up.
Posted by Louise at 10:22

I recently reread this, though I didn't read it for the first time --in the 90 ies--until we got the first pet rabbit, which came in from the yard., evidently it escaped from someone raising them for food! Love the book.

What a thorough review! You tell us about the plot and about how the book originated, and then go on to share fascinating details. Wonderful!

I loved this book, and I loved sharing it with my kids. It had such heart, I could almost forget it was about bunnies- but it wouldn't have been so wonderful if they hadn't been rabbits.

I haven't read this either. I probably thought I was too cool for it as a teen. It sounds like it's worth a read!

I loved this book when I was a child. I remember being quite worried too in certain sections! Might be worth a re-read.