I hadn't heard of this book when I saw the flyers at my local library for an upcoming event with author David Hill.  But I immediately knew that I needed to go, and it just needed a little roster rearranging to get there. Easy peasy. It was great to see a full room, even for a lunchtime, midweek session.

David Hill has written three books before, all of which I have meant to read, some of which I've even bought, but they still languish unread on my shelves. Much more my fault than his of course. Perhaps this will be the book I'll read first? After all timing is everything. I've been reading a little bit about early explorers of Australia this year, and I was captivated to learn something about the early French fascination with Australia at the recent Napoleon exhibition in Melbourne. The Great Race perfectly fills the spot here.

The Great Race begins with an account of the early exploration of Australia by the Dutch, Portugese, Spanish and English, but is ultimately the story of Matthew Flinders and Nicolas Baudin, who were both charged by their respective governments of England and France to map the uncharted coast of the great south land. 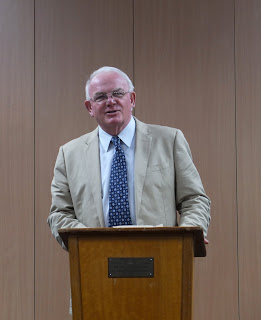 David Hill gave us a fascinating overview of the history involved. He said that this book needed more research than his other three books combined. Whilst researching 1788, he had realised that at the time England consigned the 11 ships of the First Fleet to travel to Australia and found a new colony they didn't actually know what Australia was. England in the 1780s didn't know if New South Wales was connected to what is now called Western Australia! Joseph Banks must have been very persuasive that Botany Bay was such a marvellous place to settle. Of course, the First Fleet spent three days in Botany Bay, before deciding it was too awful, and heading north to Port Jackson (now Sydney Harbour).

The Dutch had actually charted half of Australia's coastline before 1650, and yet it would be over 150 years before the job was completed by the French. The Portugese had been in the area establishing the spice trade with Indonesia, which was then taken over by the Dutch. David Hill told us that the Portugese and Dutch were motivated by trade and wealth, whereas the English and French were motivated by the spirit of exploration and scientific discovery.

Australian school children are taught that Matthew Flinders was the first to circumnavigate Australia. Indeed I think I still thought that he was. Google says he was. David Hill tells us he wasn't, not by a long shot. Turns out that the first circumnavigation of Australia was undertaken by a French ship under the command of the fabulously named Antoine Raymond Joseph de Bruny d'Entrecasteaux, who was sent to Australia to search for the lost mission of La Perouse. David told us that the disappearance of La Perouse had united revolutionary France. Louis XVI certainly seems to have been fascinated by his disappearance, but hoped for good news each day. de Bruny d'Entrecasteaux circumnavigated Australia searching for La Perouse and his two ships 10 years before Matthew Flinders' voyage.

Some fascinating if somewhat random facts.

The Australian Navy maps of today still use some sections as charted by Flinders.

The British Navy ration included half a pint of rum per man per day. How they ever got them to work I don't know.

Often half the crew died on each voyage. Scurvy was the biggest killer of course. Captain Cook was one of the first to beat scurvy and keep most of his crew alive.

The Great Race details such an interesting time in Australian history, but also world history. I'm really looking forward to reading it.

The English certainly were uber eager to offload the convicts. Other side of the world, 6 month voyage, no idea about the place...oh well off you go. I've read some of Cook's journal lately. When they first saw Aboriginal people in Australia they didn't know if they were wearing dark clothing or if it was the skin colour. And they sailed by a lot at night so left plenty unmapped.

It certainly was a really enjoyable talk. David Hill was engaging, and relayed fascinating content (which bodes well for the book of course). They were eager to offload the convicts. Cook's journals sound rather fascinating. I'm looking forward to learning more about this time, and these men.