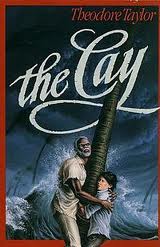 I love it when you read a book that you know nothing at all about, you have never really heard of the book, or the author before, and it's a wonderful, intriguing read. Happily, The Cay turned out to be one of those reads for me.

The first chapter alone taught me so much. The early story is set in Curacao (where? Is that an actual place? Isn't that just a blue liqueur teenagers drink in bad cocktails? I know I did). Curacao turns out to be a glorious looking island jewel in the Dutch Antilles, off the Venezualan coast. Clearly not an area I know all that much about. Not now, or as it was in the 1940s when our story is set. So it's not surprising that I was unaware that oil refineries in Curacao where attacked by German submarines in World War II. Indeed, the whole Battle of the Caribbean had passed me by until now.

I guess my mother was homesick for Virginia, where noone talked Dutch, and there was not smell of gas or oil, and there weren't as many black people around.


After Curacao is attacked by German submarines in February 1942 Phillip's mother's anxieties become too much for her to stay and she decides to take Phillip back to America. She is afraid of flying and decides to make the even riskier voyage by sea. Their ship was attacked soon after leaving Panama, at the start of Chapter 3.

Phillip becomes separated from his mother, and ends up on a raft, with a large Negro sailor, Timothy, and the cook's cat from the ship, Stew Cat. The major part of the book is the story of their struggle to survive and the relationship that develops between Phillip and Timothy. Phillip has to learn to overcome the racism that he has learned at his mother's knee, and to trust and befriend Timothy, who is a gentle giant of a man, protective of Phillip and knowledgeable.

Theodore Taylor wrote The Cay in just 3 weeks, having spent 11 years mulling over the real incident of a Dutch boy lost at sea after his ship was attacked during the war. It's a powerful tale, "outrageous good" as Timothy would say. It is sparsely written with a concise Hemingway kind of vibe. The Cay is still in print and easily available, and I believe it is still being quite widely read in the US in school classrooms, which is great. I don't know that it's all that well known in Australia, but it should be.

I've read quite a few castaway stories now. Kensuke's Kingdom. The Black Stallion. Island of the Blue Dolphins. All of which have been really quite enjoyable. So I wonder why it is that I'm stuck halfway through the story that started them all, Robinson Crusoe, with no desire to keep reading? I really should get back to it, but I have so many other books that are much more fun to read waiting for me.

Read as part of my ongoing quest to read 1001 Childrens Books You Must Read Before You Grow Up.
Posted by Louise at 00:02

I think this one was all over reading lists when I was younger but I never did manage to read it. Sounds like it's one I should get and hand to the youngest kid (after I finish it myself of course).

I hope you get to read it, and that you both enjoy it. I'm going to try and have it be our next read aloud pick.