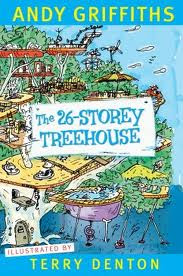 Silly me, I thought The 13-Storey Treehouse was a standalone title! But no, here in a timely fashion is the sequel, and I see  in the back that the third in the series, The 39-Storey Treehouse is scheduled for release September 2013.

Andy Griffiths and Terry Denton are a prolific Australian writing and illustrating kids lit powerhouse. Their books are extraordinarily popular. Andy Griffiths had one of the longest signing queues I saw at the recent Melbourne Writers Festival.

Here, Andy and Terry are still living in the their treehouse, although they have added on an extra 13 fun-filled storeys including an anti-gravity chamber, a dodgem car rink and an ice-cream parlour with 78 flavours run by an ice-cream serving robot Edward Scooperhands.

The 26-Storey Treehouse tells the rather tall stories of how Andy and Terry met, and how they met their friend and neighbour Jill who lives on the other side of the forest. It involves emergency self-inflating underpants, open-shark surgery, pirate captains with wooden heads and large fish who smell like blue cheese. It's all rather improbable, and that's a whole lot of the fun, right there. I enjoyed this book more than the original, whereas my 11 year old preferred the 13-Storey Treehouse.

You can hear Andy Griffiths speaking about The 26-Storey Treehouse on Books and Arts Daily recently at Radio National. Or his rather eclectic selection of his top 5 favourite cultural items on Top Shelf.
Posted by Louise at 23:02

What a fun sounding book, no wonder both yourself and your son are enjoying the series so much.

You are obviously considerably younger than I and have grown up with some of the amazing artwork that the illustrators of childrens books can produce, seemingly at will. I just think back to the almost amateurish illustrations in the books I read so avidly as a child and wish I were young again!!

I think that children will always remember the first book in a series, but all too easily lose interest in subsequent issues. It seems that they are always striving for new stimulation and ideas and are so much more mature than I was as a child.

Encouraging a child to read a book, any book, is such an achievement and great authors and illustrators such as Andy and Terry, can be a true asset.

This looks like quite a fun journey to explore an ever growing tree house. Love the cover!

You have to admire Andy and Terry - they've nailed the 7-12 boy market in Australia! Queues for book signings all around the country, book sales that go through the roof the week theír latest book is released, excited children hanging around bookshops and libraries talking about books!