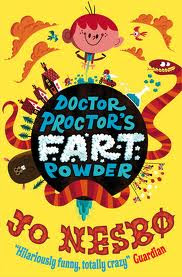 It took me a while to notice Jo Nesbo. A few months ago I noticed that everyone seemed to be reading his series of Norwegian Noir crime novels. Not my typical fare it must be said. Apparently they're very good, but I'm yet to read any. Then I discovered that he had also written some kids books, the first having the alluring title of Doctor Proctor's Fart Powder. Well who could resist that? So this week I took advantage of the copy that my visiting 7 year old nephew brought with him, and read it. It was fun. So fun. And funny.

Originally published in Norway in 2007, Doktor Proktor's Prompepulvet (isn't that a glorious title?) was a story created at the request of Jo Nesbo's daughter, and now available in English. A marvelous tale set in Oslo about a quiet suburban street called Cannon Avenue. Doctor Proctor is the local crazy inventor professor type that every street needs. He has a number of wonderful powder inventions besides his Fart Powder. He also makes fabulous jellies that are several metres long. How many more ways can you endear yourself to children?

Doctor Proctor's neighbours are two children, Lisa who is pining for her best friend who has just moved to Sarpsborg, and Nilly a small boy who has just moved in to the house across the street. Of course Lisa and Nilly think that Doctor Proctor's Fart Powder is fantastic, and are eager to help in any way they can to bring this wonderful advance to the children of Oslo and the world.

I loved the Scandinavian feel of this book. The things the children eat are quite unusual to Australian sensibilities- bread and salami for breakfast, meatballs, fish au gratin, liverwurst, weiner schnitzel, fish cakes, and there seems to be a lot of eggnog in anticipation of Norwegian Independence Day. Not that any of this is bad, well maybe the liverwurst, but it adds to the exotic feel.

So what is it about? Fart powder clearly. Fartonaut powder too. Twin bullies called Truls and Trym who live on the corner. Giant anacondas, and other giant creatures roaming the sewers of Oslo. Nilly's favourite book Animals You Wish Didn't Exist. Akershus Fortress. What appear to be frequent snide remarks about Finland. And the musicality that may or may not be evident in school bands.

The Dolgen School Marching Band marched and played like never before. They hit a lot of the right notes and had never been closer to playing in time.

It's a satisfying and funny read, with a quirky Norwegian feel.
Posted by Louise at 22:57

I've been wondering about these books for a while now. I'm not usually too fond of toilet humour but these do sound genuinely funny. I'm glad to hear that they retain the Nordic feel too.

My youngest has this one but I've never taken the time to read it, figuring it would have limited appeal. There's apparently a sequel now as well (said the boy who begged for it when last at the bookstore).

I had no idea he's written children's books. My son would have loved this one!

Interesting author I didn't know of
Thanks!
carolg