I'm just loving the Melbourne Writers Festival. So many great sessions. Yesterday I went to a session titled Meet Jackie French as part of the schools program. The room was packed, mainly with kids, most of whom are enthusiastic readers, and many of whom want to be writers. Great to see kids at the festival. Participating. Engaged. Asking questions. Queueing to get their books signed after sessions. Authors as rock stars! Fantastic.

Jackie French has had many jobs of course, and her years in tv showed. She grabbed a microphone, stood up and just talked, and talked, so passionately. She really worked the room. The kids, and we brave grown ups, loved it. 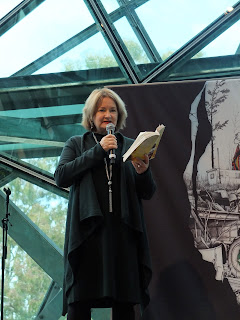 Jackie French published her first book in 1992 (even though it had been accepted 5 years earlier!), and has published more than 130 books since then! I just tried to work out how many books she's published this year, and I can't. I think she writes faster than I read... Happily this day she mainly spoke about her recent book Nanberry. An extraordinary book that was one of my favourite reads of 2011. Check out my enthusiastic review here.

She spoke about the story, and she spoke about the process of writing the book. Nanberry wasn't the book she planned to write. Initially she planned to write a short, funny book "The Possum Who Kissed A Convict", it was a story she already knew and she thought it would be an easy book to write. But then she kept finding more stories accidentally. She met a descendent of Nanberry's at a conference. She found out more about Rachel Turner when documents from the Old Bailey came online.

Nanberry was a "very, very difficult book to write". It was four books that became one. Jackie French clearly knows her Aussie history, and is extremely passionate about it. When speaking of Waltzing Matilda she became even more enervated when she described it's origins as a song of defiance, and her despair that it has now devolved to be a folk song.

More generally she always writes the ending of a book first. Though of course, the ending may change during the writing process. When asked about her mastery of multiple genres, she said that she would hate to be limited to one genre, and she compared it to being forced to eat only one food all the time.

Big news- Jackie French's next book will be out on Dec 1 2012. The Girl from Snowy River. Yes Girl.  It's a sequel to A Waltz for Matilda. Another book I need to hurry up and read.

Jackie French is one author I would have liked to see but alas I have to work!

An author that is completely unknown to me here in the US. It is always so wonderful when an author knows how to talk to people, too! Glad you had a great time.

Work gets in the way of so many things Marg! It seems she does quite a lot of speaking engagements, I'm sure you'll get to see her sometime. I'd certainly go and see her again.

Deb, you'll have to seek her out. Did I leave that copy of Nanberry with you? I know I meant to.

Happy to hear about the new title coming out in Dec. I thoroughly enjoyed Matilda.

Yes I was thrilled too Brona, although I do wish I'd managed to read Matilda already.