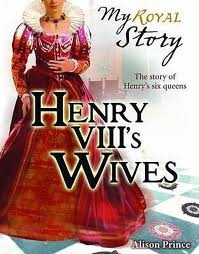 Sometimes my son picks an intriguing choice for our read aloud bed time reading book. Yes, even though he's 11, I still read aloud to him whenever my work and his tv watching schedule allow. It's a time we both enjoy. Most often we're reading mythic tales of magic and dragons. Sometimes we're reading historical fiction. We've read a few books in this series now. Marie Antoinette. Titanic. And a few others that I thought too awful to blog about. I'm not sure why he's so keen on these but he liked them even before his passion for Horrible Histories developed.

He likes this series so much that he reads these books on his own also. He had already read Henry VIII's Wives, and when I needed a thematic break from magic and ancient monsters he was keen for us to read this one together. I'm glad we have. I don't really know all that much about Tudor England. It was certainly an extraordinary time. I was a bit confused with the diary format here. Our diarist narrator, Beatrice is just 10 years old when she starts her diary. She seems to be a servant in Henry VIII's court, but it's all a bit confusing. She's a servant but the servants seem to spend quite a bit of time with the members of the royal family- it seems that they are part of the court.

I was a bit bored with the overall format by the time we got to the end of this one. The structure was quite confusing being a melange of the diaries of several girls, and the narrative jumped back and forth in time over 30 years or so. And there was a bit too much about affairs and whether marriages were consummated for my liking for comfortable bed time reading.  But there were lots of interesting historical snippets to learn. I'm sure these things are known by most people with more than a passing interest in Tudor England.

Catherine of Aragon was a mere 15 years old when she initially married Henry VIII's brother Arthur, Prince of Wales. When Arthur died a few months later, Catherine was widowed aged 16. Henry famously married her, but then divorced her because of the biblical passage forbidding men to covet his brother's wife.

And if a man shall take his brother's wife, it is an unclean thing; he hath uncovered his brother's nakedness; they shall be childless.


While she was queen Henry left Catherine in charge of England while he went to war with the French, Catherine fought a war with Scotland and won.

Anne Boleyn and Jane Seymour were both servants before becoming queen. Indeed the whole servant/royal relationships as portrayed here were very confusing.

Anne Boleyn and Katherine Howard were cousins, as well as the two royal wives who were beheaded.

Katherine Parr was a published author! (You can buy her book on Amazon)

Henry and the Tudors are certainly still intriguing even in modern times. Historical fiction sells and sells, and the hugely popular Wolf Hall is set in Henry's court. Modern people have video fun with Henry.

And of course the Horrible Histories folks love Henry too of course.