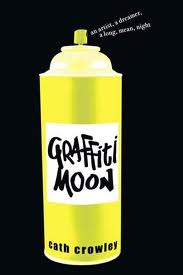 I always really enjoy reading some fiction based around travel locations. So when I had the chance to travel to Melbourne for the Melbourne Writers Festival this year I was keen to read some local writing. Happily I chanced on this review of Graffiti Moon in the week or so before I left. Perfect timing.

Graffiti Moon was an Honour Book for the Older Readers in the Children's Book Council of Australia Awards in 2011. It also won the Young Adult prize for the Prime Minister's Literary Award in 2011 and the NSW Premier's Literary Award. So I'd seen it around and was thrilled to start. 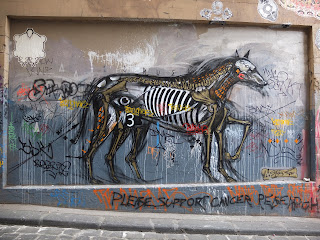 Graffiti Moon is the story of one hot Melbourne night. Lucy is finishing high school and going for a night of fun adventure with her friends Jazz and Daisy. Daisy has a boyfriend, Dylan, but he's forgotten her birthday and is throwing eggs at her head in a show of boyhood excitement at finishing school.

Lucy is an artistic type, she has been learning glass blowing from an artist in a local studio and working on her Year 12 major piece. Both her parents are creative too, her mother is trying to finish a novel, her father a magician. Of course they have to hold down more pedestrian jobs to pay the bills. Things aren't running all that smoothly and her father is currently living in the shed in the backyard. 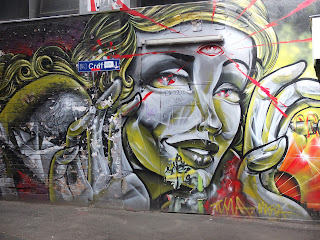 Lucy is besotted with a local graffiti artist Shadow. She sees his work on walls in the local area, and is moved by his work, his artistry. She knows that he isn't like the boys at her school. Lucy hasn't met him, but she plans to, although his identity is a closely guarded secret and he works stealthily at night with his partner Poet who provides the words to Shadow's vision.

I like that about art, that what you see is sometimes more about who you are than what's on the wall.


But tonight she is out with her girlfriends and stuck with Dylan and his two friends, Ed and Leo. She plans to use this night to find Shadow and meet him. 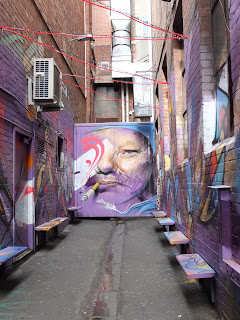 There are many, many art and artist references, which I know I wouldn't have got when I was a younger reader. Jeffrey Smart. Rothko. Vermeer. Magritte. Some others that I have never heard of before. Cath Crowley does a good job of incorporating enough about these artists and their works that you get the meaning, without it seeming forced. Cleverly told in three alternating voices. Lucy. Ed and Poet. I was very quickly drawn into this wonderful, funny story.

There is a lot of interesting art down the laneways etc in Melbourne! Hope you enjoy your time here!

Thanks Marg, I'm having a lovely time. The festival is great, and lots of wonderful non-festival happenings too.

Some pretty designs alright. Doing the painting yourselves is more fun but a good place for ideas for more design is this
site of wahooart.com, that I use to help with my wall decorations.

You can browse for a painting like this The tree, by 20th century Czech artist, Frantisek Kupka, for example, http://EN.WahooArt.com/A55A04/w.nsf/
OPRA/BRUE-8LHUQV , that can be ordered on line and delivered to you.