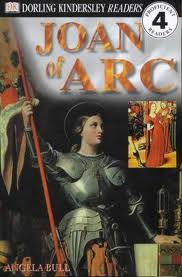 My fascination with Joan grows daily. This Junior Reader was a perfect place to start. As you may have noticed I quite like Junior Nonfiction, and believe even adults can learn something from most JNF that we pick up. I certainly learnt lots from this little book.
Joan's basic story is so fascinating, that it would appear to defy reality, but of course it's true. An illiterate poor provinicial girl, starts seeing visions as a young teenager. The saints appear to her- St Michael, St Catherine, St Margaret. The saints tell her extraordinary things, that she is to do the work of God, and lead France to victory against the English (who control Northern France in the early 15th century, at the tail end of the 100 year war). Somehow, she gets into the royal court, the dauphin supports her, she starts fighting at Orleans, she gets the dauphin coronated as king in Rheims. Joan has a series of extraordinary victories, but is killed at the age of 19 by being burned at the stake.
The structure of this DK reader is typical for this series. The story is in the middle of the page with fascinating little tidbits or sidestories on the margins. 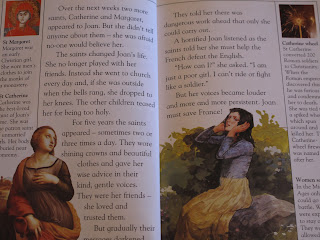 My favourite tidbit
I learnt lots of things from this little book.
The saints who appeared in visions to Joan, were all quite specific to her needs. St Catherine was a local saint for Joan. She was the best-loved saint of Joan's time. She would have been a local hero for Joan as she is buried near Joan's town of Domremy. She was the patron saint of unmarried girls. It reminded me that Catherine wheels are named after her, and the terrible method in which she was put to death on such a wheel. Thankfully in the modern world, Catherine wheels are pretty fireworks, but for many centuries they were a brutal method of torture, and a slow death.
St Margaret was an early Christian girl who wore men's clothes to allow her to join a monastery. St Michael of course was a famous warrior who slayed the dragon.
Joan refused the offer of a sword from the dauphin, and instead used a sword that her voices told her would be at the shrine of St Catherine at Fierbois.
Orleans had been under seige by the English for 6 months when Joan led her assault. This was apparently a favourite method of the English, they would just wait, with no need for fighting, while the inhabitants of the beseiged town starved until they were ready to surrender.
The dauphin was cowardly and didn't want to go to Rheims, in English held Northern France for the coronation. 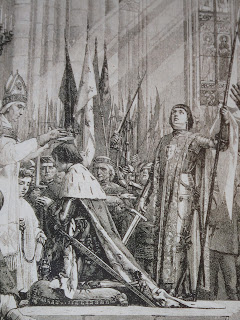 Half of France, including Paris, was held by the English at this time. Joan gathered her soldiers at the small town of St Denis outside Paris. St Denis is particularly fascinating. I learnt a bit about him during my trips to Paris. He was the Bishop of Paris in the third century. Bishops weren't treated too well at that time. Denis was beheaded, and he was said to have picked up his head and walked six miles carrying it, preaching a sermon. He is usually depicted holding his own head.
Joan started experiencing some losses. Her sword broke. She was captured by the Burgundians, and bought by the English for 10,000 francs. She jumped 20 metres from a castle tower trying to escape. She was tried in a French court, but tried by the English. She signed a confession, and was sentenced to lifelong imprisonment wearing dresses rather than her usual men's clothing. Joan's voices came to her and told her she had been wrong, and she changed back into her male attire. She was burned at the stake at the marketplace in Rouen on 30th May, 1431 wearing a dunce's cap which labelled her a heretic, and a dress dipped in sulphur to burn more quickly. Her ashes were thrown into the river as a final insult, instead of being collected for worshippers.
Joan called herself Joan the Maid. She was never referred to as Joan of Arc during her lifetime, and it was only after her death, and her legend grew that she became Joan of Arc.
Posted by Louise at 12:08

cross-dressing, long torturous deaths on wheels, hitting courtiers..
There may be a reason I haven't read any juvenile books.
I think I'd rather look at juvenile chooks ..

Playing by the book said...

Thanks for joining in with nonfiction monday.