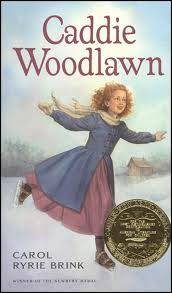 Should I admit that I wasn't looking forward to reading this book? Probably not. My lack of desire to read Caddie was mainly based on ignorance I guess. I had only heard of this book within the past few years. I only vaguely knew that it was a story of growing up in the harsh frontier life of America. And that was about it. Of course, Caddie won me over. I came to enjoy the book, and the things it taught me.

Caddie Woodlawn is the story of an 11 year old tomboy living in the wilds of Wisconsin in 1864. Abraham Lincoln is president of America. The American Civil War was in full swing. And the Woodlawn family were doing their best to get along on their frontier farm. The family had recently moved from Boston and now lived in a farm house near a small village. The town shared a teacher with a nearby settlement, so that the children went to school for 3 months at a time twice a year, leaving them time to do their chores on the farm. They made do, and wasted nothing. Clothes were handed down, clocks and watches were repaired and not merely thrown out or replaced, and nothing was wasted, especially unsold turkeys.

That much I had expected I guess. What I hadn't expected was such a controversial book. Caddie Woodlawn deals extensively with race relations between the white settlers and the Native American populations. Caddie Woodlawn was published in 1935, and won the Newberry Medal in 1936.

Carol Ryrie Brink based her character Caddie, on her grandmother, Caddie Woodhouse. Carol had a particularly tragic early childhood, her grandfather was murdered and she was  orphaned by the age of 8- after her father had died of consumption, and her mother committed suicide. She went to live with her grandmother Caddie and a maiden aunt. Little wonder that she loved hearing her grandmother's stories of her own happy childhood on the frontier with her many brothers and sisters.

The language is dated at times it's true- Caddie talks of half-breeds and redskins, and compares rough skin to that of an Indians. But Caddie and her father are friendly with the local Indian population, they openly trust them, especially Indian John. The book starts with Caddie and her two brothers, Tom and Warren crossing the river to visit the local Indians while they are making a birch-bark canoe. There have been many massacres in the area in the preceeding few years, and from the second page the question of whether the locals would ever participate in such an activity is raised. Every time, Caddie and her father speak strongly in defence of their local Native friends. Throughout the book, the troublemakers are white settlers.

There is a moving passage early on in Chapter 3. Caddie and the other children are expecting a visit from Uncle Edmond, who always "comes with the pigeons." There is a great description of flocks of migrating passenger pigeons (whom Uncle Edmond liked to hunt).

One night when they went to bed the sky was clear and the woods were still. But when they awoke in the crisp autumn morning the air was full of the noise of wings, and flocks of birds flew like clouds across the sun. The passenger pigeons were on their way south. They filled the trees in the woods. They came down in the fields and gardens, feeding on whatever seeds and grains they could find. The last birds kept flying over those which were feeding in front,  in order to come at new ground, so that the flock seemed to roll along like a great moving cloud.


The boys go out hunting, but Caddie stays inside

She liked hunting as well as the boys. But this was too easy. This was not hunting-it was a kind of wholesale slaughter. She knew that the Indians and the white men, too, caught the birds in nets and sent them by thousands to the markets. She knew that wherever the beautiful gray birds went, they were harrassed and driven away or killed. Something of sadness filled her young heart, as if she knew that they were a doomed race. The pigeons, like the Indians, were fighting a losing battle with the white man.


That's very moving, and rather far sighted. Although by the time Carol Ryrie Brink writes Caddie Woodlawn in 1935, passenger pigeons have been extinct for over 20 years. The last passenger pigeon, the sadly named Martha, died in captivity in 1914. Another environmental tragedy.

I worried, as I rightly should, about reading children''s books published many years ago. I've had very bad experiences with these (see Newbery winner Daniel Boone and the very first Newbery winner, The Story of Mankind, for very bad experiences). But that was not true of Caddie. She, like many of the best older children's books with female protagonists, had spunk. (What about all the other girls and women of the time? Was that their real problem? Lack of spunk? Spunk-less?)

Hi, I curate the facebook page devoted to the "Caddie Woodlawn Musical" I really love what you have to say about the book. May I post this on our page?

Sure Lola, I'd be chuffed if you linked to my post. Thanks for asking. I hadn't realised that there was a musical!