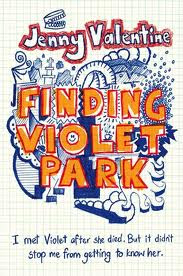 This author and book were new to me. I was quite keen to read it, for some reason I really liked the cover even though I knew relatively little about the book.

Finding Violet Park is the story of a 15 year old boy, Lucas, who comes across an urn of ashes in a minicab office. Lucas becomes quite obsessed with the ashes, the mortal remains of Violet Park, and he wants to free her from the drudgery of her final resting place. Someone had left Violet's ashes in the back of a cab a number of years earlier, and they sat there, unloved and unclaimed. Lucas wants to find out more about her.

If you think about it, a person being dead isn't any barrier to finding out what they are like. Half the people we learn about in school have been dead for ages. People write whole books about William Blake and Henry the Eighth and Marilyn Monroe, and they've never met them and they still sound like they know what they are talking about.

I do have a soft spot for books written in an engaging first person narrative. While I wasn't completely swept away by Lucas, as I was by Cedar B. Hartley recently, I did enjoy it very much. As with all young, quirky first person narrators, Lucas is somewhat precocious in his observations. And naturally Lucas's life is fragmented, his father has disappeared several years ago, and Mum is doing her best to keep the family together.

The book deals with some serious subjects, but has a great sense of humour mixed in. There is a wonderful anti-smoking rant quite early on which starts with Lucas railing against the fact that tobacco

"doesn't get you high. What's the point of being addicted to something that will kill you and doesn't even make you laugh or feel good or anything?"

Which makes a great deal of sense when you think about it. In one of my favourite sections Lucas is talking about his grandmother, Pansy.

Pansy has a dog called Jack (Russell) and sometimes I have no idea if she's talking about the dog or Grandad.
"He's been under my feet all day and his breath smells terrible." (Dog)
"he's not been for three days. I think he needs a good walk." (Norman)


Lucas ponders the pivotal moments in a life "chance happenings that end up meaning everything." And wonders if "all most people do when they grow up is fix on something impossible and then hunger after it."

We learn a number of interesting things along the way- such as Agatha Christie famously disappeared for 11 days in 1926. Was she really in a fugue state? Or did she deliberately run away? And thugs as a concept comes from 14th century India!

I haven't heard of this book before but I've added it to my list because it sounds great. Thanks for the review--without your sharing, I'd have remained in ignorance.