The Pedant in the Kitchen 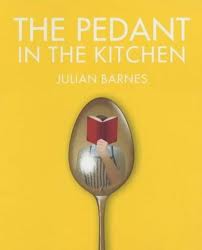 I have a growing respect and admiration for Julian Barnes. We didn't get off to a good start because I read his England, England book first. And hated it so much I can't explain. The only reason I ever picked up another of his books was because I read and absolutely loved Gustave Flaubert's Madame Bovary. So I tentatively picked up Flaubert's Parrot. And loved it so much that I bought my own copy after I took the library copy back (I'd borrowed it expecting not to like it, and gave myself permission to stop reading it within the first few pages if I hated it- and I always make myself push on!) Anyway, I Absolutely Loved Flaubert's Parrot. And so I started to hope that perhaps England, England was an aberration.

Somewhere along the way I accumulated The Pedant in the Kitchen, and in an idle moment last night I picked it up. I've had a wonderful break in my scheduled reading over the past 10 days and have actually been able to pick up books on a whim! I've been very keen to read his recent Booker winner The Sense of an Ending, but have remained strong and not bought it yet.

The Pedant in the Kitchen appears to be a collection of 17 newspaper columns about Barnes' relative OCD nature  in the kitchen. He starts off telling us rather matter of factly that he is a late-onset cook. He didn't learn techniques and measurements at his mother's side as a young child. It was only as an adult, in his twenties that Julian was forced to try and prepare his own meals. With some initial disappointments of course. I think most of us go through that stage really. Wondering how your mother did very simple things, when it had just always appeared in a perfect form previously.

Julian isn't without ambition or hope in his cooking efforts though. He uses cookbooks, and relatively complicated ones at that and comes to take on some rather challenging dishes. Chocolate Nemesis from the first River Cafe Cookbook. A smoked haddock souffle from Margaret Costa's Four Seasons Cookery Book. Autumn Pudding (apparently much superior to Summer Pudding- with a mix of elderberries, blackberries and crab apples) from Susan Campbell's English Cookery New and Old. Jane Grigson's Salmon in Pastry with a Herb Sauce.

Julian wants things to be extremely precise whilst creating his haddock souffle. "Why should a cookbook be less precise than a manual of surgery?" He is an "anxious pedant" in the kitchen. Should that tablespoon of currants be heaped or rounded? In truth, I'm sure it matters not. I don't think Julian has ever truly heard, and certainly hasn't internalised the wisdom conveyed in the phrase "we're not building a piano".

I adhere to gas marks and cooking times. I trust instruments rather than myself. I doubt I shall ever test whether a chunk of meat is done by prodding it with my forefinger. The only liberty I take with a recipe is to increase the quantity of an ingredient of which I particularly approve.

I think anxiety and lack of self confidence is the key here. You should never trust instruments more than your own judgement. In the kitchen, or in surgery as it turns out.

When not obsessed about minor details in the kitchen Julian takes us rather far and wide. The trial brought about by Oscar Wilde against the Marquess of Queensberry for criminal libel. Gustave Flaubert apparently not only admired camels in Egypt on his travels but he also ate some. However, his favourite delicacies were mandarins and oysters. And Mrs Beeton died at the unfortunately young age of 28, and so was not the dowager housekeeper we all imagine.

Julian has some interesting and useful thoughts on cookbooks, which I think I will leave for another post.

This post is linked to Weekend Cooking, a fabulous weekly meme at Beth Fish Reads.

I am on the list at the library for The Sense of an ending.

This one sounds interesting to me thought I'm usually not one for short stories or vignette collections. Something about his insecurity in the kitchen (which I share to some extent except when it comes to baking) speaks to me I guess.

hmmm . . I always pictures Mrs. Beeton to live to a ripe old age for some reason. This sounds really interesting. Have a great week, happy reading and cooking.

I imagined Mrs Beeton to be old as well. Sounds like a interesting read. With cooking I definitely take liberties, but I'm with him, I need a thermometer for meat!

Have your read his book ‘The Lemon Table’? Short stories, but one called ‘Appetite’ is food -related...and quite unsettling!

I love short commentaries or story collections - will have to check this one out! Happy reading!!

I want to read Mr. Barnes' Booker Prize winner (I'm #47 at the library.) While I wait this gives me a nice look at the person who wrote the book. He sounds like a real character.

I have a modern re-issue of one of Mrs. Beaton's cookbooks. Sounds like fascinating reading.

This sounds very interesting. Would love to try the autumn pudding(yum!). Am following you through GFC now..

Now I really have to read Julian Barnes writings.

I am glad that you enjoyed this book much more than his previous one :) It is always nice to find new foodie books that you enjoy :)

I'm not a big fan of short stories/vignettes either but I might give this one a try...you've piqued my curiosity with the other titles as well :)

I'm unfamiliar with this author. I'll have to check my library for the titles you mention. Short stories can be perfect when you don't have much extra reading time.

Sounds like an interesting read - I'm always curious to know how other people think in the kitchen. It helps me understand how better to write recipes and make them clearer and easier to follow, for one thing.

I read this book a few years ago - before I blogged - having picked it up on a whim somewhat like you it sounds. A fun book to read so I enjoyed your refreshing my memory!

I asked for The Sense of an Ending for Christmas, so was interested to read your review (which I found through the Foodie's Challenge review list).

He sounds like the opposite kind of cook I am, so I think I would like this book, just because his pedantry might make me laugh.

Thanks for the great review.