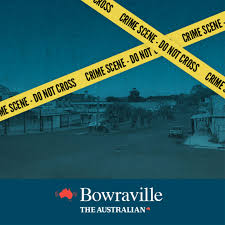 I just inhaled this incredible six episode podcast, recommended repeatedly by Leigh and Annabel on several episodes of the mighty Chat 10, Looks 3.  As I listened I was mystified that I'd never heard about the disappearance and murder of these three children.

Now that I've listened to Bowraville: OMG I can't believe that I've never heard of this case before. Three (Aboriginal) children were murdered on the same street in Northern NSW over five months in 1990-1991. Three (white) children disappeared in Adelaide in 1966 and I know all about it, and have heard about it for decades. This one? Nothing. Never heard of it before. Is it really because these three children were Aboriginal? I really hope that it isn't, but fear that it is.

The three Bowraville children were 16 year old Colleen Walker, 4 year old Evelyn Greenup and 16 year old Clinton Speedy-Duroux. The bodies of only two of them, Evelyn and Clinton, have been found. Although Colleen's clothing was found weighted down in the nearby Nambucca River.

Extraordinary claims are made during the podcast. That the police refused to record Colleen and Evelyn as missing initially, stating that they had gone walkabout! Sure 16 year olds do run away, but a four year old!

One man, Jay Hart, was tried, separately, for the murders of Evelyn and Clinton. He was acquitted both times. I presume that there has been no trial into Colleen's death because her body has still never been found. Incredibly at the end of the podcast, Jay Hart rings the reporter Dan Box. They have a 45 minute conversation (which is available in full after the final episode).

Look away now if you want to listen to the podcast (and I recommend that you do) and don't want to hear my thoughts.

During Bowraville I thought Dan Box did a great job of presenting a fairly even view of events, and yet it was inevitable I guess that you would think that Jay Hart must be guilty. While the evidence is all circumstantial really, noone else was even presented as a suspect. The police have tried him separately, i.e. twice, for the murder of two of these children. They must think he's guilty. There is currently consideration in the NSW Court of Appeal as to whether there should be a retrial. Apparently a decision is expected soon.

Bowraville was produced by The Australian in May 2016.

It seems I did miss quite a bit of media about the murders over the years.

A 2006 Australian Story Truth Be Told (video no longer available sadly, but a transcript available)

A 2010 article The Mission - Malcolm Knox (The Monthly)

Dan Box is currently writing a book about the Bowraville murders! YAY. Although I was hoping to get through a podcast without growing the TBR. Oh well.
Posted by Louise at 21:23

Yes, I saw the Australian Story program on this. But as you say it's nowhere near as well known as the Beaumont children, and there has to be racism involved really. (BTW I think you have the wrong date for them - presuming it is the Beaumonts you are talking about?)

Ooh, yes, sorry it is the Beaumont children I am talking about- didn't notice my typo- but have fixed it now, thanks Sue.I always mean to watch Australian Story more than I do, but the timing never works out. I need to watch it on iview these days.